Over the past couple of weeks I have had some interesting questions from folks about different VSAN Stretched failure scenarios, in particular what happens during a VSAN Stretched Cluster site partition. These questions were in particular about site partitions and how HA and VSAN know which VMs to fail-over and which VMs to power-off. There are a couple of things I like to clarify. First lets start with a diagram that sketches a stretched scenario. In the diagram below you see 3 sites. Two which are “data” sites and one which is used for the “witness”. This is a standard VSAN Stretched configuration. 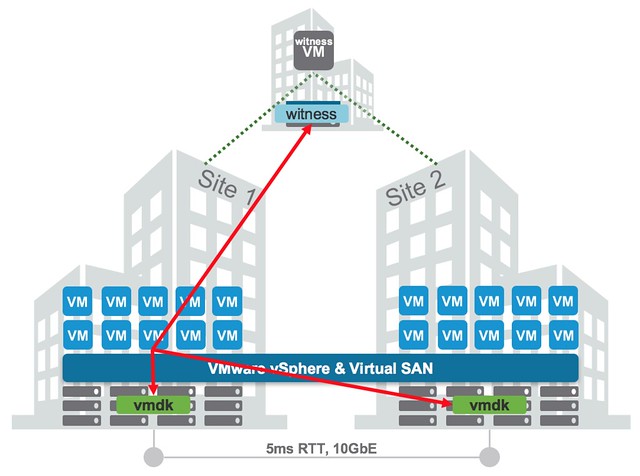 The typical question now is, what happens when Site 1 is isolated from Site 2 and from the Witness Site? (While the Witness and Site 2 remain connected.) Is the isolation response triggered in Site 1? What happens to the workloads in Site 1? Are the workloads restarted in Site 2? If so, how does Site 2 know that the VMs in Site 1 are powered off? All very valid questions if you ask me, and if you read the vSphere HA deepdive on this website closely and letter for letter you will find all the answers in there, but lets make it a bit easier for those who don’t have the time.

First of all, all the VMs running in Site 1 will be powered off. Let is be clear that this is not done by vSphere HA, this is not the result of an “isolation” as technically the hosts are not isolated but partitioned. The VMs are killed by a VSAN mechanism and they are killed because the VMs have no access to any of the components any longer. (Local components are not accessible as there is no quorum.) You can disable this mechanism by the way, although I discourage you from doing so, through the advanced host settings. Set the advanced host setting called VSAN.AutoTerminateGhostVm to 0.

In the second site a new HA master node will be elected. That master node will validate which VMs are supposed to be powered on, it knows this through the “protectedlist”. The VMs that were on Site 1 will be missing, they are on the list, but not powered on within this partition… As this partition has ownership of the components (quorum) it will now be capable of powering on those VMs.

I hope that helps. For more details, make sure to read the clustering deepdive, which can be downloaded here for free.