I have written about vCLS a few times, so I am not going to explain what it is or what it does (detailed blog here). I do want to talk about what is part of vSphere 7.0 U3 specifically though as I feel these features are probably what most folks have been waiting for. Starting with vSphere 7.0 U3 it is now possible to configure the following for vCLS VMs:

I created a quick demo for those who prefer to watch videos to learn these things, if you don’t skip to the text below. Oh and before I forget, a bonus enhancement is that the vCLS VMs now have a unique name, this was a very common request from customers.

Why would you need the above functionality? Let’s begin with the “preferred datastore” feature, this allows you to specify where the vCLS VMs need to be provisioned to from a storage point of view. This would be useful in a scenario where you have a number of datastores that you would prefer to avoid. Examples could be datastores that are replicated or a datastore that is only intended to be used for ISOs and templates, or maybe you prefer to provision on hybrid storage versus flash storage.

So how do you fix this? Well, it is simple, you click on your cluster object. You then click on “Configure”, and on “Datastores” under “vSphere Cluster Services”. Now you will see “VCLS Allowed”, if you click on “ADD” you now will be able to select the datastores to which these vCLS VMs should be provisioned. 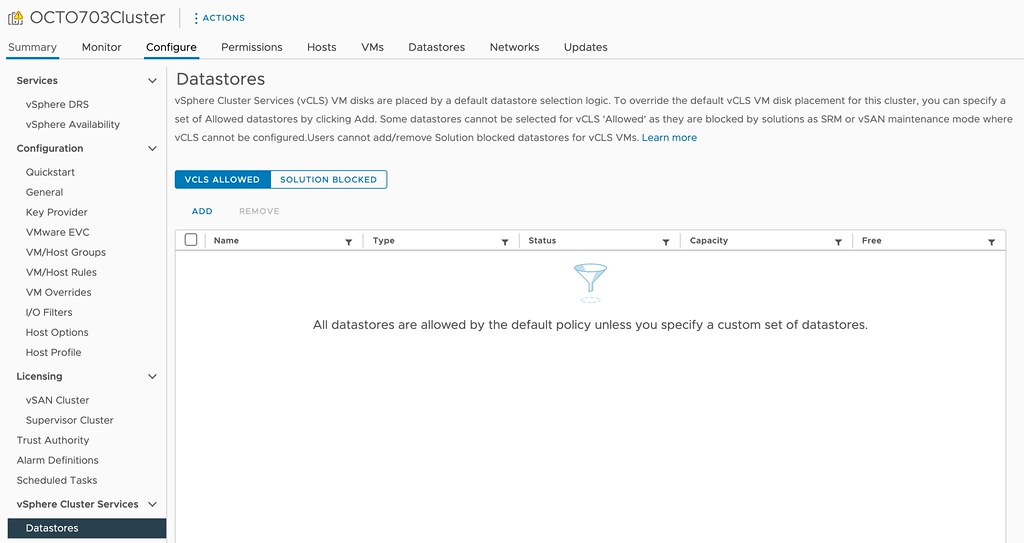 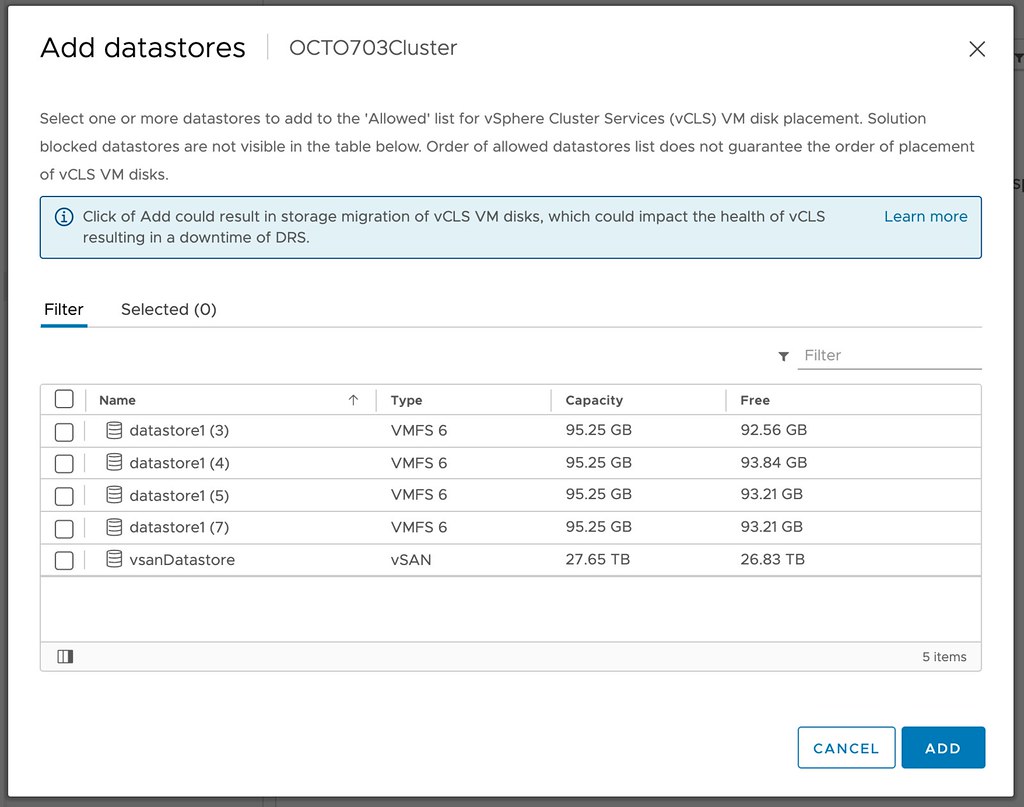 Next up Anti-Affinity for vCLS. You would this feature for situations where for instance a single workload needs to be able to solely run on a host, something like SAP for instance. In order to achieve this you can use anti-affinity rules. We are not talking about regular anti-affinity rules. This is the very first time a brand new mechanism is used on-premises. I am talking about compute policies. Compute policies have been available for VMware Cloud on AWS customers for a while, but now are also appear to be coming to on-prem customers. What does it do? It enables you to create “anti-affinity” rules for vCLS VMs and specific other VMs in your environment by creating Compute Policies and using Tags! 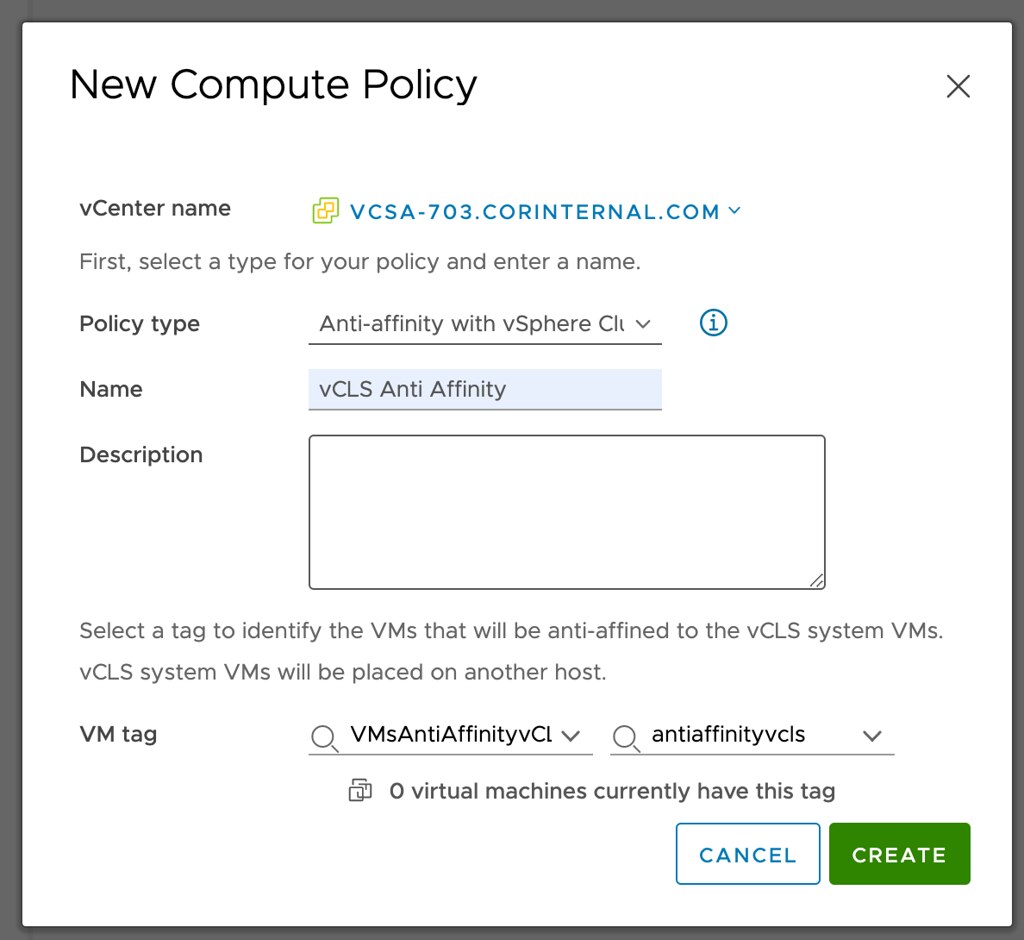 In this blog post, I want to go over the features which have been released for vSAN as part of 7.0 U3. It is not going to be a deep dive, just a simple overview as most features speak for themselves! Let’s list the feature first, and then discuss some of them individually.

I guess the Cluster Shutdown feature speaks for itself. It basically enables you to power off all the hosts in a cluster when doing maintenance. Even if those hosts contain vCenter Server! If you want to trigger a shutdown, just right click the cluster object, go to vSAN, select “shutdown cluster” and follow the 2-step wizard. Pretty straight forward. Do note, besides the agent VMs, you will need to power-off the other VMs first. (yes, I requested this to be handled by the process as well in the future!) 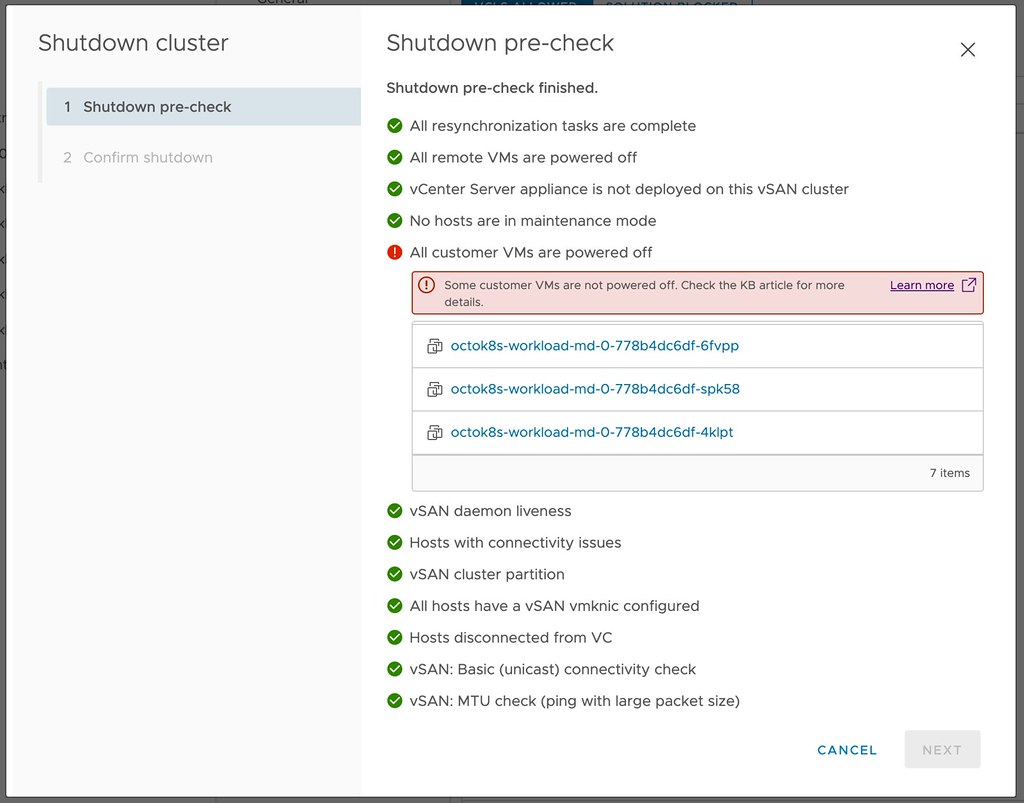 The Skyline Health Correlation feature is very useful for customers who are seeing multiple alarms being triggered and are not sure what to do. In this scenario, starting with 7.0 U3, vSAN will now understand the correlation between the events and inform you what the issue is (most likely) and show you which other tests it would impact. This should enable you to fix the problem faster than before.

IO Trip Analyzer is also brand new in 7.0 U3. I actually wrote a blog post on the subject separately and included a demo, I would recommend watching that one. But if you just want the short summary, the IO Trip Analyzer basically provides an overview of latency introduced at every layer in the form of a diagram!

Nested Fault Domains for 2-node clusters has been on the “wish list” of some of our customers for a while. It is a very useful feature for those customers who want to be able to tolerate multiple failures even in a 2-node configuration. The feature requires you to have at least 3 disk groups per host, in each of the 2 hosts, and will then enable you to have “RAID-1” across those two hosts and RAID-1 within the host (Or RAID-5/6 if you have sufficient disk groups). If a host fails, and then a disk fails in the surviving host, the VMs would still be available. Basically a feature for customers who don’t need a lot of compute power (3 hosts or more), but do need added resiliency!

Enhanced Stretched Cluster durability (also applies to 2-node) is a feature that Cormac and I requested a while back. We requested this feature as we had heard from a few customers that unfortunately, they had found themselves in a situation where a datacenter would go offline, followed by the witness going down. This would then result in the VMs (only those which were stretched of course) in the remaining location also be unusable, as 2 out of the 3 parts of the RAID tree would be gone. This would even be the case in a situation where you would have a fully available RAID-1 / RAID-5 / RAID-6 tree in the remaining datacenter. This new feature now prevents this scenario! 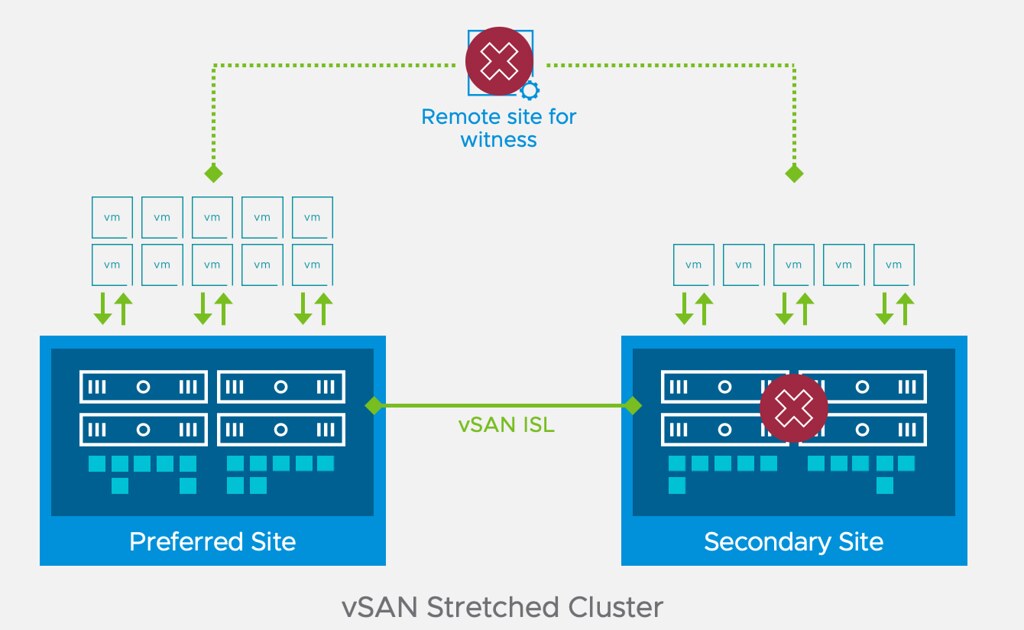 Last, but not least, we now have support for Access Based Enumeration for SMB shares via vSAN File Services. What does this mean? Pre vSAN 7.0 U3, if a user had access to a file share the user would be able to see all folders/directories in this share. Starting with 7.0 U3 when looking at the share, only the folders that you have the appropriate permissions for will be displayed! (More about ABE here)

In vSAN 7.0 U1 a new feature was introduced called IO Insight. IO Insight basically enabled customers to profile workloads and it provided them with a lot of information around the type of IO the workload was producing. In vSAN 7.0 U3 this is taken one step further with the IO Trip Analyzer. The IO Trip Analyzer provides details around the, yes you guessed it, trip of the IO. It basically informs you about the latency introduced at the various stages of the path the IO has to travel to end up on the capacity layer of vSAN.

Why would you need this? This tool is going to be very useful and will complement IO Insight when it comes to doing performance troubleshooting, or when it comes to getting a better understanding of the IO path. IO Trip Analyzer can be easily enabled by going to the “Monitor” section of the VM you want to enable it for. 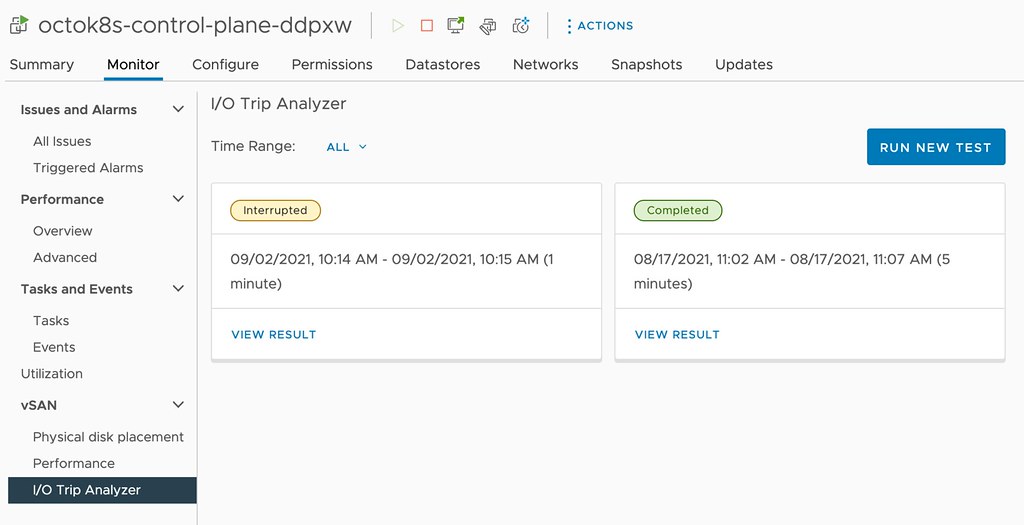 You simply click “Run new test” and then specify for how long you want to analyze the VM (between 5 and 60 minutes). When the specified amount has passed you simply click on “View Result” and this will then provide you a diagram of the VM and its components. 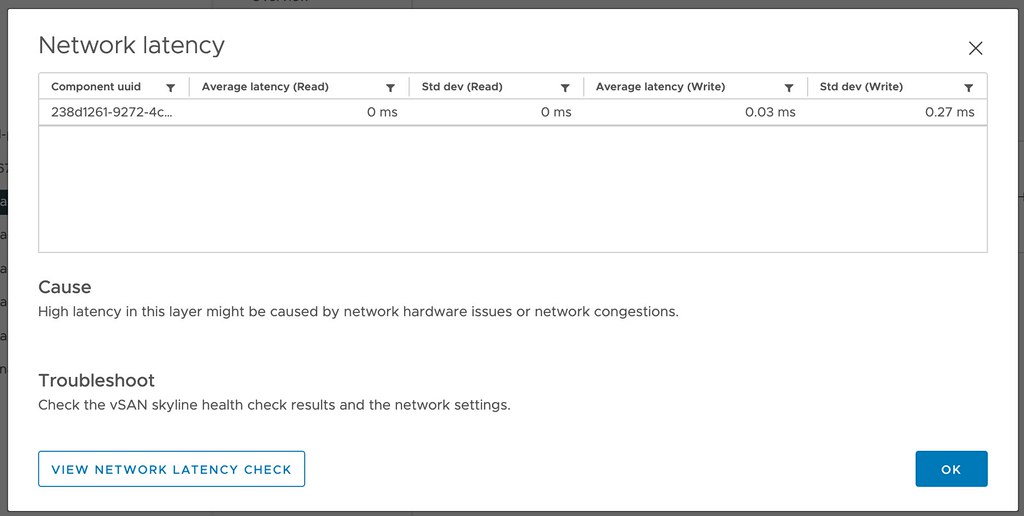 Before I share the demo, I should probably mention that there are some limitations in this first release of the IO Trip Analyzer (Not supported: Stretched Clusters, CNS persistent volumes, iSCSI etc) but I suspect those limitations will be lifted with every follow-up release of vSAN. I truly feel that this is a big improvement when it comes to performance troubleshooting, and I can’t wait to see what the vSAN team is planning for the future of this release.

We’ve all seen those posts from people about worn-out SD/USB devices, or maybe even experience it ourselves at some point in time. Most of you reading this probably also knew there was an issue with 7.0 U2, which resulted in USB/SD devices wearing out a lot quicker. Those issues have been resolved with the latest patch for 7.0 U2. It has, however, resulted in a longer debate around whether SD/USB devices should still be used for booting ESXi, and it seems that the jury has reached a verdict.

On the 16th of September, a KB article was published by VMware, which contains statements around the future of SD/USB devices. I can be short about it, if you are buying new hardware make sure to have a proper persistent storage device, USB/SD is not the right choice going forward! Why? The volume of reads/writes to and from the OS-DATA partition continues to increase with every release, which means that the lower grade devices will simply wear out faster. Now, I am not going to repeat word for word what is mentioned in the KB, I would just like to urge everyone to read the KB article, and make sure to plan accordingly! Personally, I am a fan of M.2 flash devices for booting. They are not too expensive(greenfield deployments), plus they can provide enterprise-grade persistent storage to store all your ESXi related data. Make sure to follow the requirements around endurance though!

I looked at the log called “/var/log/vmware/applmgmt/software-packages.log”, and I noticed the following entry:

I removed the package manually as follows:

I then retried the update and it worked, as shown in the screenshot below!