Another beta announcement last week for vSAN was around Native File Services. This was the topic of HCI3041BU, which was titled “Introducing Scalable File Storage on vSAN with Native File Services”. The full session can be found here, the summary is below for your convenience. The session was by Venkat Kolli (Product Manager) and engineers Rick Spillane and Wenguang Wang.

Venkat kicks of the session describing the different types of storage most of our customers have in their data center today, and also what kind of data lands on the different types of storage. Basically, it is divided into three main types: Block, File, and Object. Where I personally believe that “object” is at the point of becoming more common on-premises but for many is consumed as a cloud service. Looking at where the data growth is today, it is mainly in the “unstructured data” space.

Next Venkat discusses the management complexity of traditional file storage, not just management complexity but also scaling and forecasting. Which in most cases leads to increased cost. How can vSAN help with simplifying File Services and lowering cost by providing a framework which allows you to serve block, file and object. For now, we are discussing file-services however, but the vision is clear. 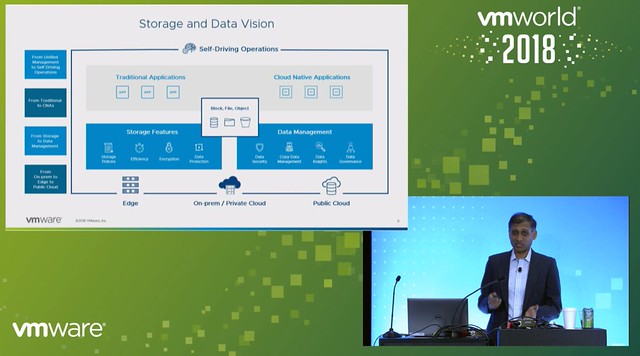 Rick is up next introducing File Services. vSAN File Services allows you to create file shares and provide file services to users/consumers through the same familiar interface you have available today in vSphere. On top of that, you get to leverage the power of policy-based management to provision file shares in a specific way. Which means that File Shares will work in stretched clusters, can be protected with vSAN Data Protection, can be striped/replicated etc. Most important piece of feedback during the design phase from customers was that they did not want a separate storage cluster to manage for file services, this needed to be an integral part of today’s offering.

The requirements and design principles for the vSAN Distributed File System were:

Rick next explains a new platform that will (potentially) be included in vSAN, this is called the Storage Services Platform. What this provides is stateless containerized frontend servers which sit on top of the vSAN Distributed File System. This will be available for both VMware and partners, so even partners should be able to provide storage services through this platform. Data will sit in the VDFS volumes and then will be exposed through these services. These services, of course, are fully distributed and self-managing. 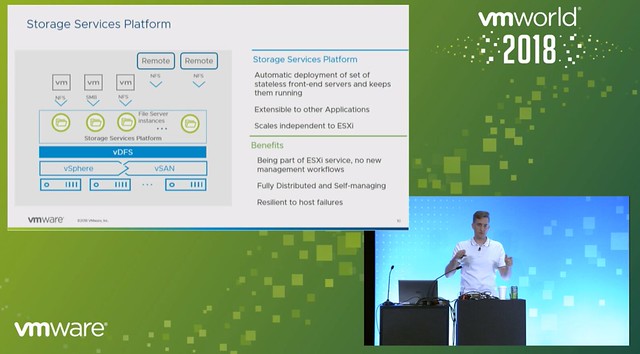 The Storage Services Platform is implemented in the form of a storage services control plane. This control plane will for instance monitor all front-end servers and node and help in the case of failures, but also will help to ensure availability during maintenance and upgrade. Also, when it comes to scalability the control plane monitors the instances and allows to scale up and down when needed.

Okay, that sounds great, but how do file shares get formed? File shares will be an aggregate of one or multiple vSAN Objects. The great thing about this is that it allows for elasticity in size and performance, plus policies can be associated with these objects. You can now simply create file shares through the UI, or leverage the API. The vSAN team made sure that you can access it and define them the way you prefer. On top of that, this platform will also be available to Kubernetes as part of our Cloud Native Storage Control Plane.

Next Rick briefly discussed data protection for file shares, he mentioned that the team has worked with various 3rd party vendors to allow for full backup and recovery, including file-level restore. What Rick also revealed, surprisingly enough, is that in the initial release we will have:

And in the release after that support for the following is planned:

Next Wenguang came up on stage, and he demoed vSAN File Services. He showed how simple it is to enable File Services in the UI. Literally, a couple of steps, provide the networking details and also authentication mechanism. The next step will be to download an OVF, this contains the frontend service we spoke about earlier, for now, this is an NFS server, but this could be other services in the future. After the File Services have been enabled and the OVF is deployed you can start creating file shares. Again this is very straightforward, part of the familiar vSAN UI / HTML-5 interface, which is what I like most, if you know vSAN and/or vSphere you will be able to use vSAN File Services as well. I hope potential other services will be implemented in a similar easy manner.

The Q&A was interesting as well, as some questions around the potential SMB implementation were answered (SAMBA on Linux vs Microsoft vs Dell/EMC stack?) and for instance what block size is used for the file system (4K, like vSAN).

All in all a very exciting solution, and a great overview of what you can expect in the future for vSAN. Note that this is part of the beta, so if you are interested sign up!