I had been playing around with my VSAN cluster for a bit the last couple of weeks and it literally has become messy. I created many VMs and many snapshots and removed many of those again, all of this while pulling cables of servers and pulling disks. Basically stress testing VSAN while injecting faults to see how it responds. It was time to clean up and upgrade to a later build as the beta refresh was just released. After deleting a bunch of VMs I noticed that not everything was removed, I had also uploaded ISOs and some other random stuff which I probably should not have. Anyway, I needed to clean one of my hosts up.

I figured I would use RVC for the exercise just to get a bit more familiar with it. First I wanted to check what the current state was of my cluster, I used the “vsan.disks_stats” command: 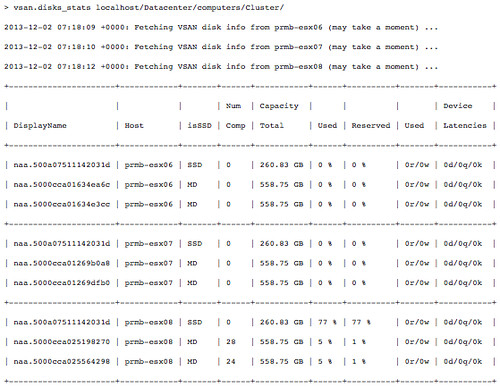 Then I figured I would want to just simply remove the disk group for Server “prmb-esx08” using “vsan.host_wipe_vsan_disks”:

Note that you can also do this using the UI: