Last week I presented in Belgium at the quarterly VMUG event in Brussels. We did a Q&A and got some excellent questions. One of them was about vSphere Metro Storage Cluster (vMSC) solutions and more explicitly about Uniform vs Non-Uniform architectures. I have written extensively about this in the vSphere Metro Storage Cluster whitepaper but realized I never blogged that part. So although this is largely a repeat of what I wrote in the white paper I hope it is still useful for some of you.

VMware vMSC solutions are classified in two distinct categories, based on a fundamental difference in how hosts access storage. It is important to understand the different types of stretched storage solutions because this will impact your design and operational considerations. Most storage vendors have a preference for one of these solutions, so depending on your preferred vendor it could be you have no choice. The following two main categories are as described on the VMware Hardware Compatibility List:

We will describe the two categories in depth to fully clarify what both mean from an architecture/implementation perspective.

The ideal situation is one in which virtual machines access a datastore that is controlled (read/write) by the array in the same datacenter. This minimizes traffic between datacenters and avoids the performance impact of reads’ going across the interconnect. It also minimizes unnecessary downtime in case of a network outage between sites. If your virtual machine is hosted in Datacenter B but its storage is in Datacenter A you can imagine the virtual machine won’t be able to do I/O when there is a site partition. 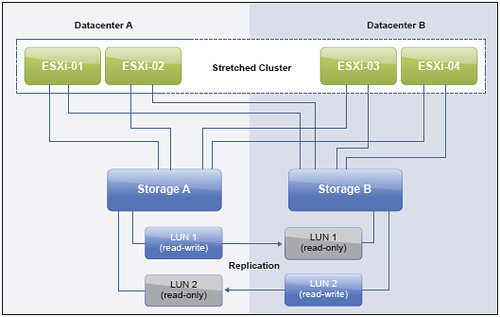 With the Non-uniform Configuration, hosts in Datacenter A have access only to the array in Datacenter A. Nonuniform configurations typically leverage the concept of a “virtual LUN.” This enables ESXi hosts in each datacenter to read and write to the same datastore/LUN. The clustering solution maintains the cache state on each array, so an ESXi host in either datacenter detects the LUN as local. Even when two virtual machines reside on the same datastore but are located in different datacenters, they write locally without any performance impact on either of them.

Note that even in this configuration each of the LUNs/datastores has “site affinity” defined. In other words, if anything happens to the link between the sites, the storage system on the preferred site for a given datastore is the only remaining one that has read/write access to it, thereby preventing any data corruption in the case of a failure scenario. This also means that it is recommended to align virtual machine – host affinity with datastore affinity to avoid any unnecessary disruption caused by a site isolation. 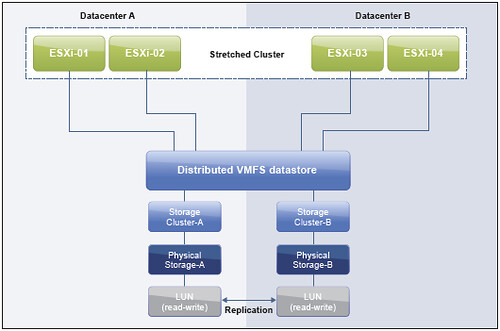