There are many networking enhancement in vSphere 5.1 but I want to call out a couple specifically. The reason for this is that there have been many discussions on this blog about “hybrid VSS / VDS” environments as many were not comfortable with running everything on a VDS. Although the risks were minimal I could understand where people were coming from. So what’s new in this space?

Management Network rollback / recovery says it all I guess. I for whatever reason you made changes that will result in your host not being able to connect to vCenter then this change will not be committed. Even more importantly, if you ever end up in the situation where your host is not able to connect to the network while using a VDS you can now reconfigure it through the DCUI (Network Restore Options). I played around with it, and I think it is a huge enhancement. I don’t see a reason to go hybrid any longer… go full VDS!

Another often heard complaint was around export/import of the VDS config or backup/restore. With vSphere 5.1 this ability is now added. Not only can you save the VDS config and use it for new VDS’s but you can of course also use this feature for backup purposes (see screenshot below). Another cool feature is that if you made a change to a portgroup that was not what you intended you can actually roll it back. 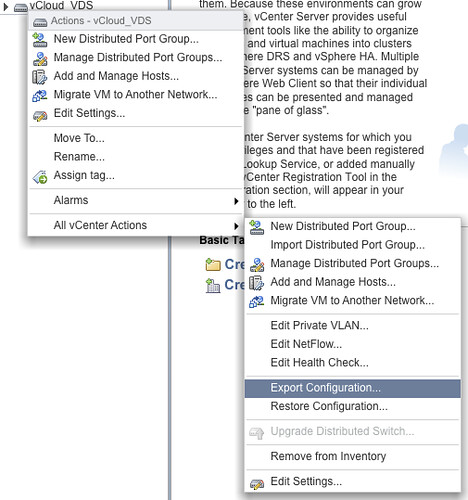 Last but not least is the “Network Health Check” option. I particularly like this feature as I’ve been in the situation many times in the past that changes were made on a physical level and people forgot to inform me about it. This will allow you to quickly identify when things changed and that will make the discussion with your networking colleagues a lot easier. In this release three things are checked:

These checks will be done every minute, and is done by sending probing packets on the VDS uplinks. If for whatever reason these probing packets fail it could indicate that the config of the physical components have changed. Nice right… I am not going to reveal any more secrets as I am guessing Venky will be writing some deepdive stuff soon.

In the mean while, for more details around what’s new I would like to refer to the great what’s new paper that Venky Deshpande wrote: What’s New for Network in vSphere 5.1.