I started digging in to this yesterday when I had a comment on my Metro Cluster article. I found it very challenging to get through the vSphere Metro Storage Cluster HCL details and decided to write an article about it which might help you as well when designing or implementing a solution like this.

First things first, here are the basic rules for a supported environment?
(Note that the below is taken from the “important support information”, which you see in the “screenshot, call out 3”.)

How do I know if the array / solution I am looking at is supported and what are the constraints / limitations you might ask yourself? This is the path you should walk to find out about it:

Yes I realize this is not a perfect way of navigating through the HCL and have already reached out to the people responsible for it. 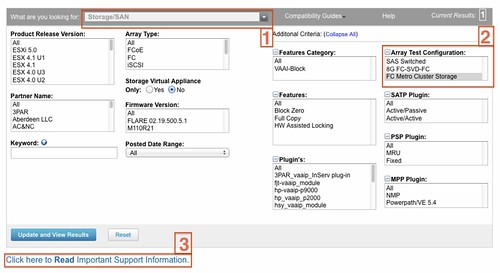