In Part 1 of this series we described the different layers of networking. We already briefly spoke about Network Pools and that both a vApp Networks and Org Networks consume a segment out of a pool. In order to fully understand vCD (VMware vCloud Director) networking we will need to explain the foundation for all Cloud Internal traffic first which is the Network Pool.

As described in one of my earlier articles vCD mainly revolves around pooling of resources. This also goes for networking and more specifically for the Org Network and the vApp Network. Each vApp and Org Network will consume a network (segment) out of a defined pool. This network pool typically isolates network “segments” on layer 2 from the other networks in the pool. There are currently 3 types of network pools:

Each of these pools have specific requirements, recommendations and constraints and they will be listed below. However all of the three different types of pools are interchangeable; with that meaning a segment from a VLAN-Backed Pool and a Portgroup-Backed pool each offer the same functionality to your Org and vApp network and basically should be seen as a means of intra-Cloud transportation. Or to simplify it even further, it provides a wire. This wire enables VMs in a vApp to communicate to each other or vApps in an Org to communicate to each other. This also means, and that might sound very logical to some, the distributed vSwitch / Nexus / vSwitch needs physical uplinks in order to enable communication across multiple hosts in a cluster!

When is a segment of the network pool used? The answer is simple, whenever you create a vApp or Org Network which is not directly connected to the above layer a segment of your designated network pool will be used. Before you ask, the reason the network pool is not used in the case of a “directly” connected Org or vApp network is because the Org/vApp network is just a logical object in that case and the VM/vApp ends up directly in the portgroup the layer above. I will show you what that looks like in Part 3 of this series which will tie part 1 and 2 together including vShield Edge.

Now lets assume you created a VLAN-backed or a vCloud Network Isolation-backed pool. When an isolated or NAT routed vApp/Org network is created vCD will automatically instantiate a new network segment. This segment is essentially a portgroup on a distributed vSwitch. This portgroup will provide layer two isolation between the different segments. As a distributed vSwitch is used every host in your cluster will instantly have the same portgroups available. There is a very specific reason I only mentioned the VLAN Backed and the VCNI Backed pool, for the Portgroup Backed pool you will need to manually pre-create all portgroups and of course ensure all those portgroups are available on every host in the cluster.

To visualize it a bit more I took three screenshots. The first one shows the network pool. The pool is VLAN backed and holds VLAN 1000 through 1100 and these networks will be created on the distributed vSwitched labeled as “dvSwitch”: 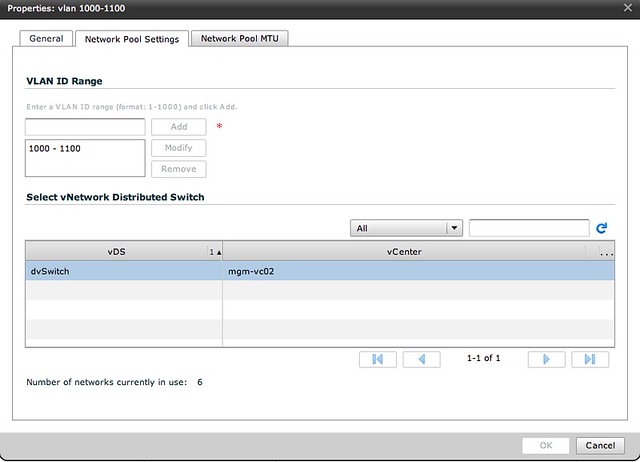 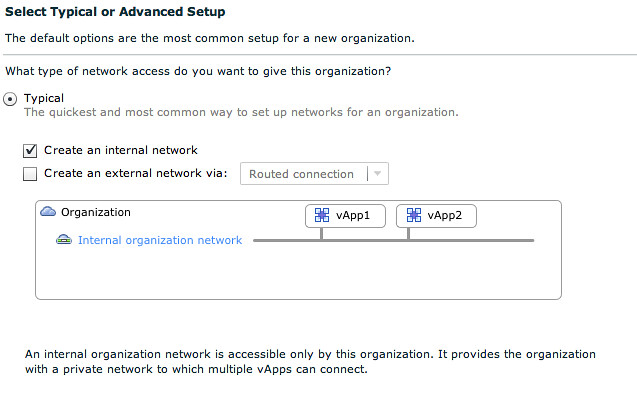 In order to be able to communicate we need a network segment. This network segment is provisioned from the Network Pool we created earlier, which was VLAN Backed.

After you fill out some of the other details and click “finish” a portgroup is automatically created within vSphere. Although difficult to read the portgroup name contains the Org Network and the VLAN ID. (VLAN 1008 and Org Network “YB-ISO-ORG”). You can even see the task at the bottom of the screenshot: 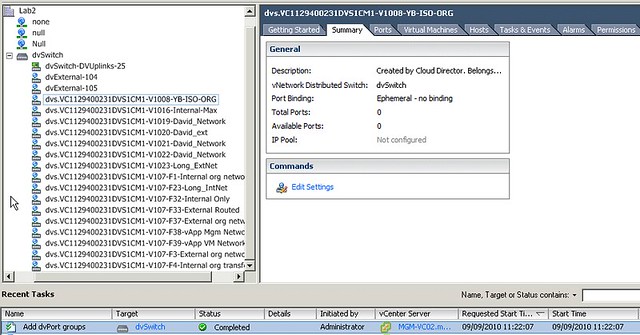 Hopefully that visualizes the process a bit more. I dropped some steps for the creation of the pool and the Org Network to keep it relatively simple. You can find a full detailed video here. Now as stated earlier each of the the three types of pools have very specific requirements and constraints I listed them below so you can make a decision based on the requirements or constraints you might have.

VLAN-backed network pools require availability of a set of unused VLANs. When an Org or vApp network is created which is based on a VLAN-backed network pool a portgroup is created on a dvSwitch and a VLAN is assigned to this portgroup. It should be noted that all VLANs specified for the pool will need to be trunked to the host and that in most environment the amount of available VLANs is limited.

vCloud Network Isolation-backed(VCNI) network pools are flexible, easy to configure and do not require VLANs. vCNI provides layer 2 isolation by utilizing a network overlay. This network overlay is provided by MAC in MAC encapsulation and requires a vDS. For each consumed network vCloud Director creates a portgroup and assigns this portgroup a network ID number. This network ID number is used for the encapsulation of the traffic. As explained vCD uses MAC in MAC for the encapsulation of traffic. However, because of that the use of VCNI requires an increase in the MTU of the underlying transport network(dvSwitch) to avoid frame fragmentation due to the minor overhead cause by the MAC in MAC encapsulation.

Now this is a very thin explanation, but I don’t want to go to deep into this as it would only complicate things.

Hopefully this clarifies network pools a bit. As explained, when creating and Org of vApp network which is not directly connected to the layer above a network of your Network Pool will be used to provide intra-cloud communication. For those who haven’t used vCD at all, believe me it took me a while to grasp these concepts so don’t be shy and ask questions/comment if anything is unclear.