After my introduction on vCD last week, I thought it was time to publish an article on Networking. Networking is most likely the most complex concept of vCD(VMware vCloud Director) and can at times be very confusing. I have created three articles which will explain the concepts of networking within vCD and of course will explain on a technical level how things work. (Including the vSphere layer)

If there are any questions don’t hesitate to leave a comment. Please note that I am deliberately trying to simplify things in this first article as I don’t want you to get lost in any of the layers of networking vCD offers.

Networking within vCD is built up out of 3 distinct layers.

These three layers have been created to give the end-user the flexibility needed in a multi purpose virtual datacenter. I have depicted all three layers in the following diagram which shows the logical relationship between the layers:

Some of you technical guys might say, that’s nice but I would like to see something less abstract. I created the following diagram which depicts the different layers in a different way. The diagram shows the three layers. I created a single External Network which links to two Org Networks. These Org Networks in its turn connect to multiple VMs(Org Y) and multiple vApps(Org X).

This is just an example however that illustrates possible network connections and as can clearly be seen it can be rather complex. As demonstrated there are multiple ways to connect vApps to each other or the outside world.

Now that we know some of the basics I will break down the three layers of networking. The  first before we will discuss any of the advanced options like vShield Edge or network pools

The External Network is used for inter-Cloud connections. Or as I like to call it “your connection to the outside world”. It is the first network “object” that you create within vCD. An External Network is always backed by a Portgroup, meaning that a portgroup needs to exist within vSphere before you can create this vCD network object. This portgroup can be on a regular vSwitch, a dvSwitch or you could use Nexus 1KV. It all works, and all of them are supported!

Of course it is heavily recommended to set this portgroup up with a VLAN for layer 2 isolation, again note that this is an outbound facing connection for your Org or for multiple Orgs.

Examples of External Networks are:

As said, an external network can be shared between organizations but is typically created per organization and is your connection from or to your virtual datacenter.

I would to stress that, the external network is your exit from your virtual datacenter or your entrance!

With that meaning that although an Org Network is primarily intended for internal traffic, it can be linked to an External Network to create an entry to or exit from your virtual datacenter. Note that it doesn’t necessarily need to be connected to an External Network, it could be completed isolated and used for “Cloud internal traffic” only! A use case for this would be for instance a test/dev environment where vApps will need to communicate with each other but not with the tenants back-end.

It should also be noted that the Org Network is mandatory! Every organization needs an Org Network, it is the only mandatory network object.

Just for completeness, an Org Network consumes a segment from a Network Pool when it is NAT/Routed or Isolated. A network pool is a collection of L2 networks which will be automatically consumed by vCD when needed, and what I call a segment is one of those L2 networks… basically a portgroup. I will explain Network Pools more in-depth in part 2.

When an Org Network is directly connected it is just a logical entity and physically doesn’t exist. Again in one of the following articles(part 3) I will explain what that looks like in vCenter.

It should be noted that the “directly connected” option for both the Org Network and the vApp Network is just a logical connection. In the back-end it will be directly connected to the layer above.

As shown in an earlier diagram and explained above a vApp can contain multiple networks. This can be used to isolate specific VMs from the outside world. An example is shown in the following diagram where only the Web Server has a connection to the Org Network and the App and Database servers are isolated but do connect to the Web server. 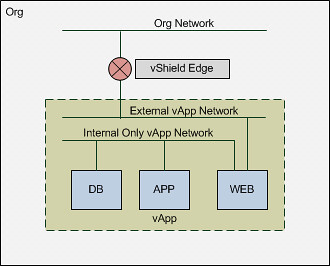 vCD has three different layers of networking. Each of these layers has a specific purpose. The External Network is your connection to the outside world, the Org Network is linked to a specific Organization and the vApp network only resides within a vApp.

That is it for Part 1. Part 2 will focus on the Network Pools and Part 3 will focus on what these vApp, Org and External Networks look like on a vSphere layer and some general best practices.

My tip of the day, if you want to get to know vCD really well, check vCenter every time you make a change and see what happens!