I was reviewing a document today and noticed something that I’ve seen a couple of times already. I already wrote about Active/Standby set ups for etherchannels a year ago but this is a slight different variant. Frank also wrote a more extensive article on it a while and I just want to re-stress this.

I created a simple diagram to depict this: 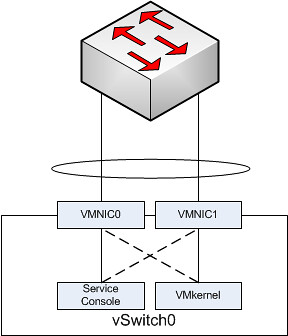 In the above scenario each “portgroup” is configured in an active/standby scenario. So let’s take the Service Console. It has VMNIC0 as active and VMNIC1 as standby. The physical switch however is configured with both NICs active in a single channel.

it will sit in a corner, lonely and depressed, wondering why nobody calls it anymore.