Yesterday someone asked me a question on twitter about a whitepaper by EMC on stretched clusters and Permanent Device Loss (PDL) behavior. For those who don’t know what a PDL is, make sure to read this article first.  This EMC whitepaper states the following on page 40:

In a full WAN partition that includes cross-connect, VPLEX can only send SCSI sense code (2/4/3+5) across 50% of the paths since the cross-connected paths are effectively dead. When using ESXi version 5.1 and above, ESXi servers at the non-preferred site will declare PDL and kill VM’s causing them to restart elsewhere (assuming advanced settings are in place); however ESXi 5.0 update 1 and below will only declare APD (even though VPLEX is sending sense code 2/4/3+5). This will result in a VM zombie state. Please see the section Path loss handling semantics (PDL and APD)

Now as far as I understood, and I tested this with 5.0 U1 the VMs would not be killed indeed when half of the paths were declared APD and the other half PDL. But I guess something has changed with vSphere 5.1. I knew about one thing that has changed which isn’t clearly documented so I figured I would do some digging and write a short article on this topic. So here are the changes in behavior:

Half of the paths in APD state:

These are the changes in behavior I know about for vSphere 5.1, I have asked engineering to confirm these changes for vSphere Metro Storage Cluster environments. When I have received an answer I will update this blog.

Today I received an email about the vSphere Metro Storage Cluster paper I wrote, or better said about stretched clusters in general. I figured I would answer the questions in a blog post so that everyone can chip in / read etc. So lets show the environment first so that the questions are clear. Below is an image of the scenario. 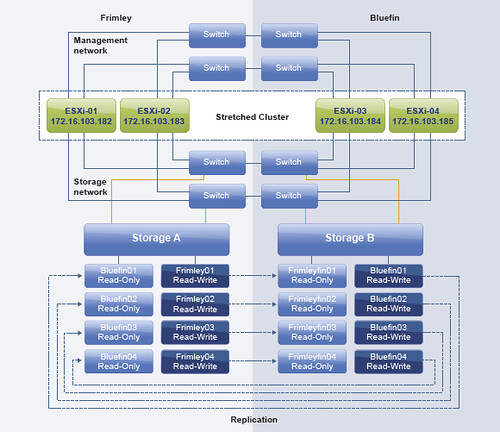 Below are the questions I received:

If a power outage occurs at Frimley the 2 hosts get a message by the UPS that there is a power outage. After 5 minutes (or any other configured value) the next action should start. But what will be the next action? If a scripted migration to a host at Bluefin starts, will DRS move some VMs back to Frimley? Or could the VMs get a mark to stick at Bluefin? Should the hosts at Frimley placed into Maintenance mode so the migration will be done automatically? And what happens if there is a total power outage both at Frimley and Bluefin? How a controlled shutdown across hosts could be arranged?

Lets start breaking it down and answer where possible. The main question is how do we handle power outages. As in any datacenter this is fairly complex. Well the powering-off part is easy, powering everything on in the right order isn’t. So where do we start? First of all:

I hope that clarifies things.