I briefly discussed the enhanced stretched cluster resiliency capability in my vSAN 7.0 U3 overview blog. Of course, immediately questions started popping up. I didn’t want to go too deep in that post as I figured I would do a separate post on the topic sooner or later. What does this functionality add, and in which particular scenario?

In short, this enhancement to stretched clusters prevents downtime for workloads in a particular failure scenario. So the question then is, what failure scenario? Let’s take a look at this diagram first of a typical stretched vSAN cluster deployment. 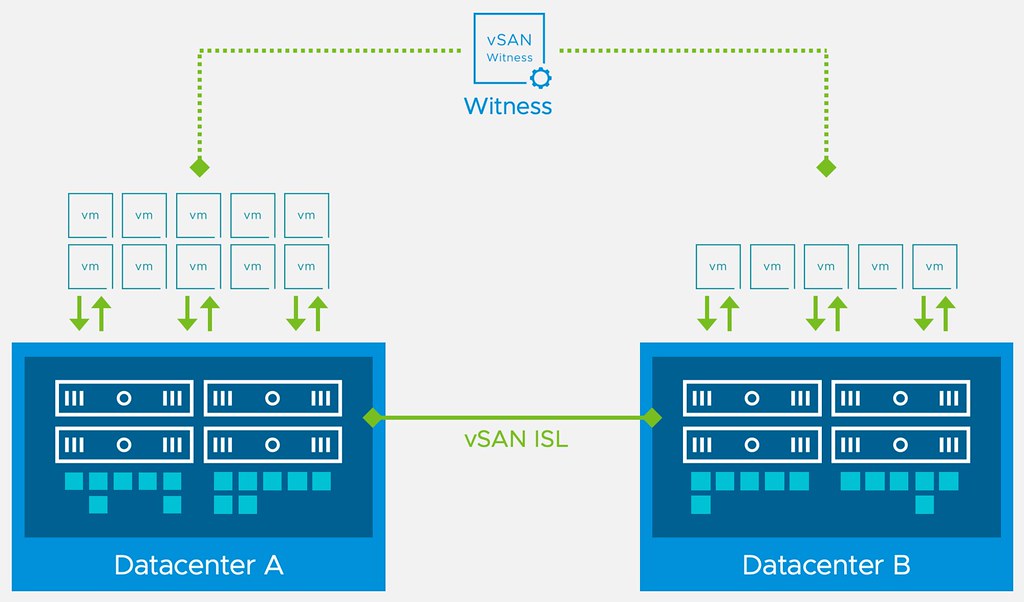 If you look at the diagram you see the following: Datacenter A, Datacenter B, Witness. One of the situations customers have found themselves in is that Datacenter A would go down (unplanned). This of course would lead to the VMs in Datacenter A being restarted in Datacenter B. Unfortunately, sometimes when things go wrong, they go wrong badly, in some cases, the Witness would fail/disappear next. Why? Bad luck, networking issues, etc. Bad things just happen. If and when this happens, there would only be 1 location left, which is Datacenter B.

Now you may think that because Datacenter B typically will have a full RAID set of the VMs running that they will remain running, but that is not true. vSAN looks at the quorum of the top layer, so if 2 out of 3 datacenters disappear, all objects impacted will become inaccessible simply as quorum is lost! Makes sense right? We are not just talking about failures right, could also be that Datacenter A has to go offline for maintenance (planned downtime), and at some point, the Witness fails for whatever reason, this would result in the exact same situation, objects inaccessible.

Starting with 7.0 U3 this behavior has changed. If Datacenter A fails, and a few (let’s say 5) minutes later the witness disappears, all replicated objects would still be available! So why is this? Well in this scenario, if Datacenter A fails, vSAN will create a new votes layout for each of the objects impacted. It basically will assume that the witness can fail and give all components on the witness 0 votes, on top of that it will give the components in the active site additional votes so that we can survive that second failure. If the witness would fail, it would not render the objects inaccessible as quorum would not be lost.

Now, do note, when a failure occurs and Datacenter A is gone, vSAN will have to create a new votes layout for each object. If you have a lot of objects this can take some time. Typically it will take a few seconds per object, and it will do it per object, so if you have a lot of VMs (and a VM consists of various objects) it will take some time. How long, well it could be five minutes. So if anything happens in between, not all objects may have been processed, which would result in downtime for those VMs when the witness would go down, as for that VM/Object quorum would be lost.

What happens if Datacenter A (and the Witness) return for duty? Well at that point the votes would be restored for the objects across locations and the witness.

In 7.0 U2, you now have the ability to specify during configuration of vSAN File Services to which site certain IP addresses belong. In other words, you can specify the “site affinity” of your File Service services. This is shown in the screenshot below. Now I do want to note, this is a soft affinity rule. Meaning that if hosts, or VMs, fail on which these file services containers are running it could be that the container is restarted in the opposite location. Again, a soft rule, not a hard rule! 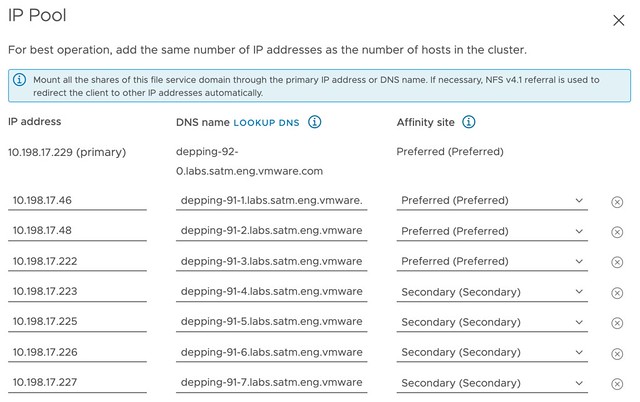 Of course, that is not the end of the story. You also need to be able to specify for each share with which location they have affinity. Again, you can do this during configuration (or edit it afterward if desired), and this basically then sets the affinity for the file share to a location. Or said differently, it will ensure that when you connect to file share, one of the file servers in the specified site will be used. Again, this is a soft rule, meaning that if none of the file servers are available on that site, you will still be able to use vSAN File Services,  just not with the optimized data path you defined. 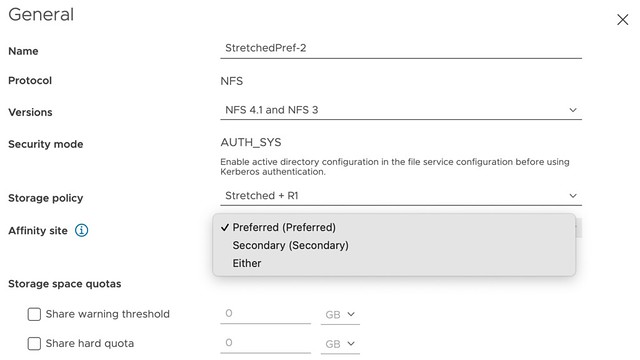 Hopefully, that gives a quick overview of how you can use vSAN File Services in combination with a vSAN Stretched Cluster.  I created a video to demonstrate these new capabilities, you can watch it below.

One of the features our team requested a while back was integration between DRS and vSAN. The key use case we had was for stretched clusters. Especially in scenarios where a failure has occurred, it would be useful if DRS would understand what vSAN is doing. What do I mean by that?

Today when customers create a stretched cluster they have two locations. Using vSAN terminology these locations are referred to as the Preferred Fault Domain and the Secondary Fault Domain. Typically when VMs are then deployed, customers will create VM-to-Host Affinity Rules which state that VMs should reside in a particular location. When these rules are created DRS will do its best to ensure that the defined rule is adhered to. What is the problem?

Well if you are running a stretched cluster and let’s say one of the sites go down, then what happens when the failed location returns for duty is the following:

This means that the VMs for which rules are defined will move back to their respective location, even though vSAN is potentially still resynchronizing the data. First of all, the migration will interfere with the replication traffic. Secondly, for as long as the resync has not completed, I/O will across the network between the two locations, this will not only interfere with resync traffic, it will also increase latency for those workloads. So, how does vSAN 7.0 U2 solve this?

Starting with vSAN 7.0 U2 and vSphere 7.0 U2 we now have DRS and vSAN communicating. DRS will verify with vSAN what the state is of the environment, and it will not migrate the VMs back as long the VMs are healthy again. When the VMs are healthy and the resync has completed, you will see the rules being applied and the VMs automatically migrate back (when DRS is configured to Fully Automated that is).

I can’t really show it with a screenshot or anything, as this is a change in the vSAN/DRS architecture, but to make sure it worked I recorded a quick demo which I published through Youtube. Make sure to watch the video! 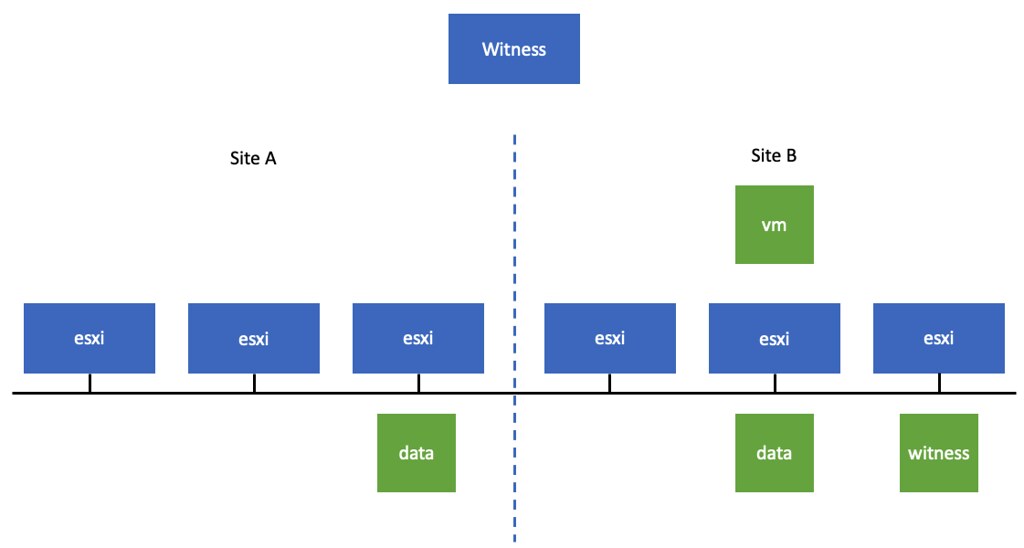 3 years ago I wrote the following post: Can I still provision VMs when a VSAN Stretched Cluster site has failed? Last week I received a question on this subject, and although officially I am not supposed to work on vSAN in the upcoming three months I figured I could test this in the evening easily within 30 minutes. The question was simple, in my blog I described the failure of the Witness Host, what if a single host fails in one of the two “data” fault domains? What if I want to create a snapshot for instance, will this still work?

So here’s what I tested:

So I first failed a host in one of the two data sites. When I fail the host, the following is what happens when I create a VM with RAID-1 across sites and RAID-5 within a site:

Okay, so this sounds similar to the originally described scenario, in my 2016 blog post, where I failed the witness. vSAN will create a RAID-0 configuration for the VM. When the host returns for duty the RAID-1 across locations and RAID-5 within each location is then automatically created. On top of that, you can snapshot VMs in this scenario, the snapshots will also be created as RAID-0. One thing to mind is that I would recommend removing “force provisioning” from the policy after the failure has been resolved! Below is a screenshot of the component layout of the scenario by the way.

I also retried the witness host down scenario, and in that case, you do not need to use the “force provisioning” option. One more thing to note. The above will only happen when you create a RAID configuration which is impossible to create as a result of the failure. If 1 host fails in a 4+4+1 stretched cluster you would like to create a RAID-1 across sites and a RAID-1 within sites then the VM would be created with the requested RAID configuration, which is demonstrated in the screenshot below.