I got this question today if you can use a custom TCP/IP stack for the vSAN Network, and I had this before. This question is usually asked by customers who have a stretched cluster as the stretched cluster forces them to create different routes in an L3 network. Especially with a large number of hosts this is cumbersome and error prone, unless you have everything automated end to end, but we are not all William Lam or Alan Renouf right 🙂

The answer is unfortunately: No, we do not support custom TCP/IP stacks for vSAN and there’s no vSAN TCP/IP stack either. The default TCP/IP stack has to be used, this is documented on storagehub.vmware.com in the excellent vSAN Networking guide which my colleagues Paudie and Cormac wrote. Of course for things like vMotion you can use the vMotion TCP/IP stack while using vSAN, that is fully supported.

Currently, vSphere does not include a dedicated TCP/IP stack for the vSAN traffic service nor the supportability for the creation of custom vSAN TCP/IP stack. To ensure vSAN traffic in Layer 3 network topologies leaves over the vSAN VMkernel network interface, administrators need to add the vSAN VMkernel network interface to the default TCP/IP Stack and define static routes for all of the vSAN cluster members.

Lately I’ve noticed that various people have been hitting my blog through the search string “e1000 VMware issues”, I want to make sure people end up in the right spot so I figured I would write a quick article that points people there. I’ve hit the issues described in the various KB articles myself, and I know how frustrating it can be. The majority of problems seen with the E1000 and E1000E drivers have been solved with the newer releases. I always run the latest and greatest version so it isn’t something I encounter any longer, but you may potentially witness the following:

These problems are witnessed with vSphere 5.1 U2 and earlier and patches have been released to mitigate these problems, if you are running one of those versions either use the patch or preferably upgrade to vSphere 5.1 Update 3 at a minimum when you are still running 5.0 or 5.1, or move up to the latest 5.5 release.

KB articles with more details can be found here:

Fellow blogger Chris Wahl just announced the availability of an awesome book titled Networking for VMware Administrators he authored with Steve Pantol. The book is published via VMware Press and is a must read if you ask me. I am going to order it for sure as it is an area that I can definitely brush up on. The book is 368 pages and covers everything from the networking models to switching, but of course heavily focuses on the virtual side and dives in to the standard vSwitch, distributed switch and the Cisco Nexus 1000v!

Knowing Chris this book is going to be worth it, his blog material has always been excellent and I expect nothing less. Congrats Chris and Steve, awesome work and looking forward to reading it.

You can pick the book up here: paper | kindle

About a week ago I wrote this article about VSAN and Network IO Control. I originally wrote a longer article that contained more options for configuring the network part but decided to leave a section out of it for simplicity sake. I figured as more questions would come I would publish the rest of the content I developed. I guess now is the time to do so.

In the configuration described below we will have two 10GbE uplinks teamed (often referred to as “etherchannel” or “link aggregation”). Due to the physical switch capabilities the configuration of the virtual layer will be extremely simple. We will take the following recommended minimum bandwidth requirements in to consideration for this scenario:

When the physical uplinks are teamed (Multi-Chassis Link Aggregation) the Distributed Switch load balancing mechanism is required to be configured as:

It is required to configure all portgroups and VMkernel interfaces on the same Distributed Switch using either LACP or IP-Hash depending on the type physical switch used. Please note all uplinks should be part of the same etherchannel / LAG. Do not try to create anything fancy here as a physically and virtually incorrectly configured team can and probably will lead to more down time!

As various traffic types will share the same uplinks we also want to make sure that no traffic type can push out other types of traffic during times of contention, for that we will use the Network IO Control shares mechanism.

We will work under the assumption that only have 1 physical port is available and all traffic types share the same physical port for this exercise. Taking a worst case scenario approach in to consideration will guarantee performance even in a failure scenario. By taking this approach we can ensure that Virtual SAN always has 50% of the bandwidth to its disposal while leaving the remaining traffic types with sufficient bandwidth to avoid a potential self-inflicted DoS. When both Uplinks are available this will equate to 10GbE, when only one uplink is available the bandwidth is also cut in half; 5GbE. It is recommended to configure shares for the traffic types as follows: 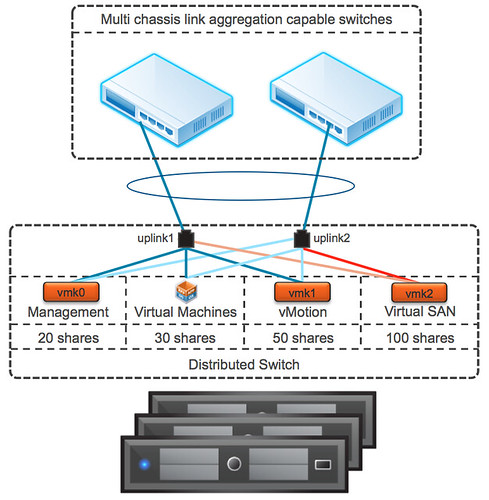 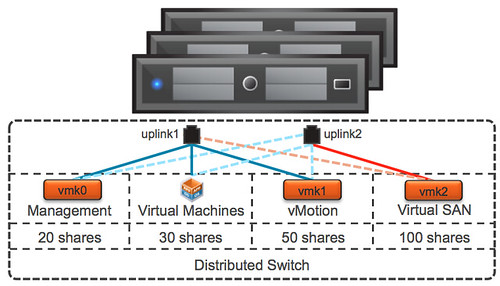