I just watched the session by Rakesh and Peng on Elastic vSAN, also known as “EBS Backed vSAN”. This session was high on my list to watch live at VMworld, but unfortunately, I couldn’t attend it due to various other obligations. If you are interested in the full session, make sure to watch it here, it is free. If you want to read a short summary then have a look below.

What is great about this solution is that it also solves another problem. Everyone knows that a host failure results in resyncing data. And depending on how much capacity the host was delivering this could take a long time. With EBS backed vSAN this problem does not exist any longer. When a host fails the EBS volumes simply will be mounted to another host, or a new host when this is introduced. This is a huge benefit if you ask me, even when there’s a high change rate as this happens within seconds. 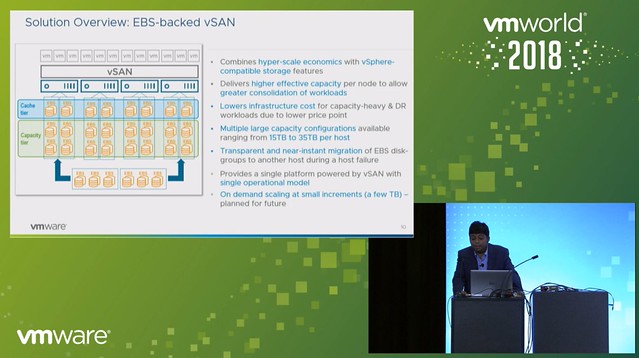 One thing to point out as a constraint though is that today in VMC you can’t run the management workloads on EBS backed vSAN just yet. Rakesh did mention that this is being tested.

Next, the architecture was discussed, this is where Peng took over. He mentioned that the IOPS limit is set to 10K (regardless of the size) and the throughput is limited at 160MBps. All of this delivered typically with sub-millisecond latency, which is very impressive. Also, Peng mentioned that EBS backed vSAN provided very consistent and predictable performance in all tests. On top of that, EBS backed vSAN is also very reliable and highly available, even when compared to flash devices.

What I found interesting is the architecture, vSAN gets presented a SCSI device, however EBS is network attached and an EBS protocol client was implemented and then presented as an NVMe target through the PCI-e interface. The PCI-e interface allows for multi-volume, hot-add and hot-remove. This is what allows the EBS devices to be removed from a host which has failed (or has a failure) and then added to a healthy host.

When EBS backed vSAN is enabled each host will have 3 disk groups, and each disk group will have 3-7 capacity disks. Note that it is recommended to use RAID-5 for space efficiency and “Compression only mode” is enabled on these disk groups. Considering the target workloads, and the architecture (and EBS performance constraints) it didn’t make sense to use deduplication, hence the vSAN team implemented a solution where it is possible to have only compression enabled. Some I/O amplification is not an issue when you run all-flash and have hundreds of thousands of IOPS per device, but as stated EBS is limited to 10k IOPS per device, which means you need to be smart about how you use those resources.

During the Q&A one thing that was mentioned, which I found interesting, is that although today EBS backed vSAN needs to be introduced in certain increments across the whole cluster, that will not be the case in the future. In the future, according to Peng, it should be possible to add EBS volumes to disk groups on particular hosts even, allowing for full and optimal flexibility,

And for those who didn’t know, the VMworld Hands-On Labs was running on top of EBS backed vSAN and performance above expectations!