As most of you have seen by the explosion of tweets, Virtual SAN 6.5 was just announced. Some may wonder how 6.5 can be announced so fast after the Beta Announcement, well this is not the same release. This release has a couple of key new features, lets look at those:

Lets start with the biggest feature of this release, at least in my opinion, Virtual SAN iSCSI Service. This provides what you would think it provides: the ability to create iSCSI targets and LUNs and expose those to the outside world. These LUNs by the way are just VSAN objects, and these objects have a storage policy assigned to them. This means that you get iSCSI LUNs with the ability to change performance and/or availability on the fly. All of it through the interface you are familiar with, the Web Client. Let me show you how to enable it:

How easy is that? Note that there are some restrictions in terms of use cases. It is primarily targeting physical workloads and Oracle RAC. It is not intended for connecting to other vSphere clusters for instance. Also, you can have a max of 1024 LUNs per cluster and 128 targets per cluster at most. LUN capacity limit is 62TB. 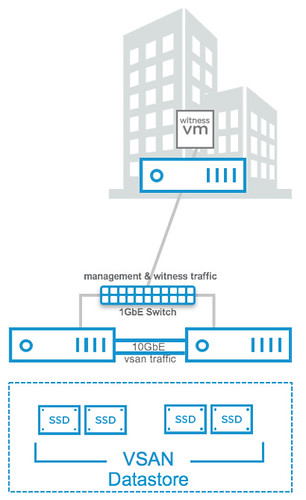 Next up on the list is 2-node direct connect. What does this mean? Well it basically means you can now cross-connect two VSAN hosts with a simple ethernet cable as shown in the diagram in the right. Big benefit of course is that you can equip your hosts with 10GbE NICs and get 10GbE performance for your VSAN traffic (and vMotion for instance) but don’t incur the cost of a 10GbE switch.

This can make a huge difference when it comes to total cost of ownership. In order to achieve this though you will also need to setup a separate VMkernel interface for Witness Traffic. And this is the next feature I wanted to mention briefly. For 2-node configurations it will be possible as of VSAN 6.5 to separate witness traffic by tagging a VMkernel interface as a designated witness interface. There’s a simple “esxcli” command for it, note that <X> needs to be replaced with the number of the VMkernel interface:

Then there is the support for 512e drives, note that 4k native is not supported at this point. Not sure what more to say about it than that… It speaks for itself.

Oh and one more thing… All-Flash has been moved down from a licensing perspective to “Standard“. This means anyone can now deploy all-flash configuration at no additional licensing cost. Considering how fast the world is moving to all-flash I think this only makes sense. Note though that data services like dedupe/compression/raid-5/raid-6 are still part of VSAN Advanced. Nevertheless, I am very happy about this positive licensing change!