Unfortunately I haven’t been able to attend too many sessions, only 2 so far. This is one I didn’t want to miss as it was all about what VMware is working on for VSAN and layers that could sit on top of VSAN. Rawlinson and Christos spoke about where VSAN is today first. Mainly discussion the use cases (monolithic apps like Exchange, SQL etc.) and the simplicity VSAN brings. After which an explanation of the VSAN object/component model was provided which was the lead in to the future.

We are in the middle of an evolution towards cloud native applications Christos said. Cloud native apps scale in a different way then traditional apps, and their requirements differ. Usually not a need for HA and DRS, and will contain this functionality within their own framework. What does this result in for the vSphere layer?

VMware vSphere Integrated Containers and VMware Photon Platform enabled these new types of applications. But how do we enable these from a storage point of view? What kind of scale will we require? Will we need different data services? Will we need to different tools, what about performance?

First project being discussed is the Performance Service which will come as part of the Health Check plugin. Providing cluster level, host level, disk group level, disk level… The Performance Service Architecture is very interesting and is not a “standard vCenter Server service”. Providing deep insights using per host traces is not possible as it would not scale. A distributed model is proposed which will enable this, but in a decentralized way. Each host can collect data, each cluster can roll this up, and this can be done for many clusters. Data is both processed and stored in a distributed fashion. The cost for a solution like this should be around 10% of 1 core on a server. Just think what a vCenter Server would look like if you had the same type of scale and cost, with a 1000 host solution could easily result in a 100 vCPU requirement, which is not realistic.

Rawlinson demoes a potential solution for this, in this scenario we are talking 1000s of hosts of which data is gathered, analyzed and presented in what appears to be an HTML-5 interface. The solution doesn’t just provides details on the environment it also allows you to mitigate these problems. Note that this is a prototype of an interface that may or may not at some point in time be released. If you like what you see though, make sure to leave a comment as I am sure that helps making this prototype reality! 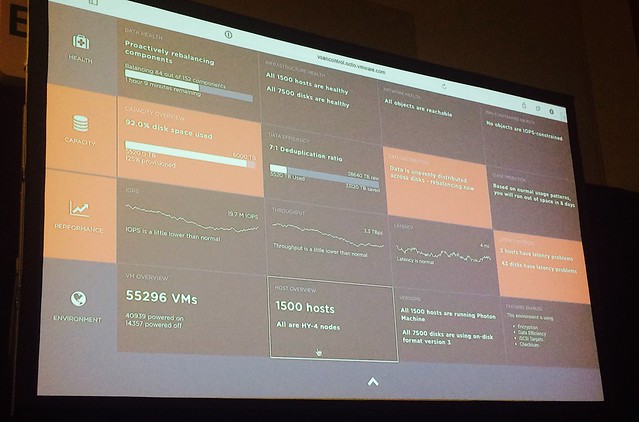 Next being discussed is the potential to leverage VSAN not just for virtual machines, but also for containers, having the capabilities to store files on top of VSAN. A distributed file system for cloud native apps is now introduced. Some of the requirements for a distributed file system would be a scalable data path, clones at massive scale, multi-tenancy and multi-purpose.

VMware is also prototyping a distributed file system and have it running in their labs. It sits on top of VSAN and leverages that scalable path and uses it to store its data and metadata. Rawlinson demonstrates how he can create 2000 clones of a file in under a second across a 1000 host and runs his application. Note that this application isn’t copied to those 1000 hosts, but it is a simple mountpoint on 1000 hosts, truly distributed filesystem with extremely scalable clone and snapshot technology.

Christos wraps up, key points are that VSAN will be the enabler of future storage solutions as it provides extreme scale, with at a low resource overhead. Awesome session, great peak in to the future.