Last week and this week I received a question and as it was the second time in a short time I figured I would share it. The question was around how VSAN places a VMDK which is larger than the disks. Lets look at a diagram first as that will make it obvious instantly. 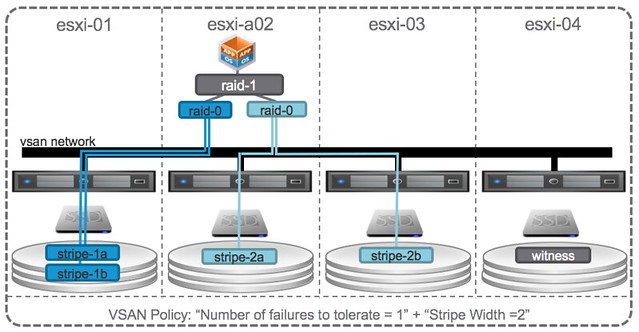 If you look at the diagram you see these stripes. You can define the number of stripes in a policy if you want. In the example above, the stripe width is 2. This is not the only time when you can see objects being striped though. If an object (VMDK for instance) is larger than 256GB it will create multiple stripes for this object. Also, if a physical disk is smaller than the size of the VMDK it will create multiple stripes for that VMDK. These stripes can be located on the same host as you can see in the diagram but also can be across hosts. Pretty cool right.