Virtual SAN, as hopefully all of you know, creates a shared datastore out of host local resources. This datastore is formed out of disk and flash. Another thing to understand is that Virtual SAN is an object store. Each object typically is stored in a resilient fashion and as such on two hosts, hence 3 hosts is the minimum. Now, by default the component of an object is not striped which means that components are stored in most cases on a single physical spindle, for an object this means that as you can see in the diagram below that the disk (object) has two components and without stripes is stored on 2 physical disks. 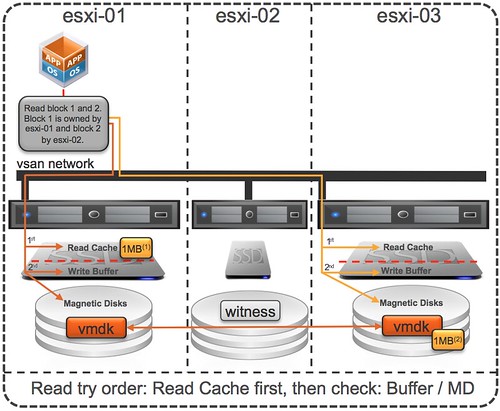 Now lets get back to the original question. Why did the backup on VSAN take longer then with a traditional storage system? It is fairly simple to explain looking at the above info. In the case of the traditional storage array you are reading from multiple disks (10+) but with VSAN you are only reading from 2 disks. As you can imagine when reading from disk performance / throughput results will differ depending on the number of resources the total number of disks it is reading from can provide. In this test, as there it is just a single virtual machine being backed up, the VSAN result will be different as it has a lower number of disks (resources) to its disposal and on top of that is the VM is new there is no data cached so the flash layer is not used. Now, depending on your workload you can of course decide to stripe the components, but also… when it comes to backup you can also decided to increase the number of concurrent backups… if you increase the number of concurrent backups then the results will get closer as more disks are being leveraged across all VMs. I hope that helps explaining  why results can be different, but hopefully everyone understands that when you test things like this that parallelism is important or provide the right level of stripe width.