I received two questions on the same topic this week so I figured it would make sense to write something up quickly. The questions were around an architectural decision for VSAN, one versus multiple VSAN disk groups per host. I have explained the concept of disk groups already in various posts but in short this is what a disk group is and what the requirements are: 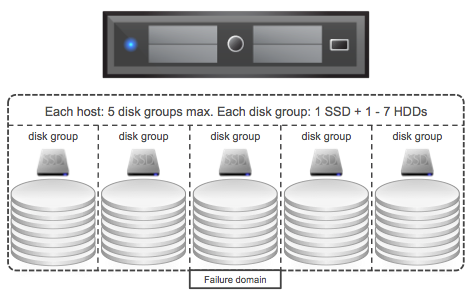 Now when designing your VSAN cluster at some point the question will arise should I have 1 or multiple disk groups per host? Can and will it impact performance? Can it impact availability?

There are a couple of things to keep in mind when it comes to VSAN if you ask me. The flash device which is part of each disk group is the caching/buffer layer for those disks, without the flash device the disks will also be unavailable. As such a disk group can be seen as a “failure domain”, because if the flash device fails the whole disk group is unavailable for that period of time. (Don’t worry, VSAN will automatically rebuild all your components that are impacted automatically.) Another thing to keep in mind is performance. Each flash device will provide an X amount of IOPS.A higher total number of IOPS could (probably will) change performance drastically, however it should be noted that capacity could still be a constraint. If this all sounds a bit fluffy lets run through an example!

This means that per host we will require:

This could simply result in each host having 2 x 2TB NL-SAS and 1 x 400GB flash device. Lets assume your flash device is capable of delivering 36000 IOPS… You can see where I am going right? What if I would have 2 x 200GB flash and 4x 1TB magnetic disks instead? Typical the lower capacity drives will do less write IOPS but for the Intel S3700 for instance that is 4000 less. So instead of 1 x 36000 IOPS it would result in 2 x 32000 IOPS. Yes, that could have a nice impact indeed….

But not just that, we also have more disk groups and smaller fault domains as a result. On top of that we will end up with more magnetic disks which means more IOPS per GB capacity in general. (If an NL-SAS drive does 80 IOPS for 2TB then two NL-SAS drives of 1TB will do 160 IOPS. Which means same TB capacity but twice the IOPS if you need it.)

In summary, yes there is a benefit in having more disk groups per hosts and as such more flash devices…