While doing some workshops and presentations for some of our partners and customers one of the comments I usually here when discussing the vSphere Storage Appliance is “Why not just buy a cheap NAS device”? Well there are a couple of arguments:

Resiliency is what I want to expand on. I like the vSphere Storage Appliance because of the resilience it offers. Many lower end storage devices have a single storage processor and some even a single power-supply but that is different for the VSA. Lets assume you have a 3 node cluster with each of these three serving up their local storage. What will it look like? 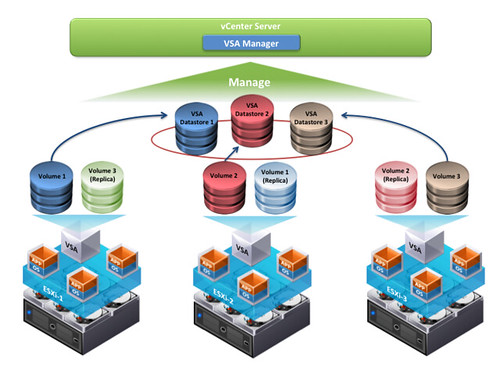 I hope this image is clear but what we see above is a three node cluster. Each node holds 2 volumes. One “active” volume and a Replica volume. Now the Replica volume is where the resiliency comes in to play. If one of the nodes would fail one of the other nodes, depending on which holds the replica, picks up! Yes indeed the VSA volumes are RAID-1 and the failure is literally detected in seconds. Note that this is a synchronous technique, so an acknowledgement is required from both the active and replica of the datastore.

In my example above when ESXi-1 (on the left) would fail then ESXi-2 (middle) would pick up as it is holding the replica. Note that this is a seamless fail-over if the VM is running on a node other than ESXi-1. The amount of time it takes for the fail-over to occur is literally second and the replica will be available through the same ip-address. If the VM happened to be running on ESXi-1 than vSphere HA would restart that virtual machine is in any other scenario.

This video demos what it looks like when a host fails:

For more details on the VSA I would like to recommend the following articles by Cormac Hogan: