As mentioned in an earlier post vSphere High Availability has been completely overhauled… This means some of the historical constraints have been lifted and that means you can / should / might need to change your design or implementation.

What I want to discuss today is the changes around the Primary / Secondary node concept that was part of HA prior to vSphere 5.0. This concept basically limited you in certain ways… For those new to VMware /vSphere, in the past there was a limit of 5 primary nodes. As a primary node was a requirement to restart virtual machines you always wanted to have at least 1 primary node available. As you can imagine this added some constraints around your cluster design when it came to Blades environments or Geo-Dispersed clusters.

vSphere 5.0 has completely lifted these constraints. Do you have a Blade Environment and want to run 32 hosts in a cluster? You can right now as the whole Primary/Secondary node concept has been deprecated. HA uses a new mechanism called the Master/Slave node concept. This concept is fairly straight forward. One of the nodes in your cluster becomes the Master and the rest become Slaves. I guess some of you will have the question “but what if this master node fails?”. Well it is very simple, when the master node fails an election process is initiated and one of the slave nodes will be promoted to master and pick up where the master left off. On top of that, lets take the example of a Geo-Dispersed cluster, when the cluster is split in two sites due to a link failure each “partition” will get its own master. This allows for workloads to be restarted even in a geographically dispersed cluster when the network has failed….

What is this master responsible for? Well basically all the tasks that the primary nodes used to have like:

As mentioned when a master fails a election process is initiated. The HA master election takes roughly 15 seconds. The election process is simple but robust. The host that is participating in the election with the greatest number of connected datastores will be elected master. If two or more hosts have the same number of datastores connected, the one with the highest Managed Object Id will be chosen. This however is done lexically; meaning that 99 beats 100 as 9 is larger than 1. That is a huge improvement compared to what is was like in 4.1 and prior isn’t it?

For those wondering which host won the election and became the master, go to the summary tab and click “Cluster Status”. 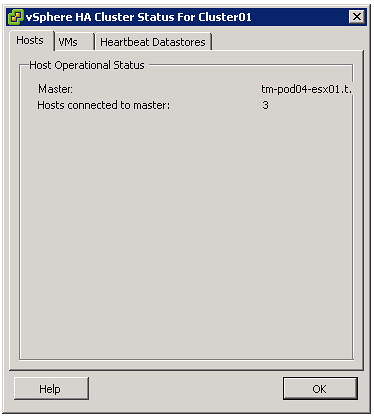 As this is a change in behavior I do want to briefly discuss the difference between an Isolation and a Partition. First of all, a host is considered to be either Isolated or Partitioned when it loses network access to a master but has not failed. To help explain the difference the states and the associated criteria below:

In the case of an Isolation, a host is separated from the master and the virtual machines running on it might be restarted, depending on the selected isolation response and the availability of a master. It could occur that multiple hosts are fully isolated at the same time. When multiple hosts are isolated but can still communicate amongst each other over the management networks, it is called s a network partition. When a network partition exists, a master election process will be issued so that a host failure or network isolation within this partition will result in appropriate action on the impacted virtual machine(s).