One of my former colleagues pointed me out to this very cool tool: Blueproximity. In short what it does, automatically lock your screen when a bluetooth device is outside of given boundaries.

Not only can you lock your pc, but you can also unlock it or kick off any script you like. It should be possible to do the following: Lock PC, set Pidgin messenger to away, mute audio… The list is endless. Read the extensive Ubuntu how to here. Thanks Patrick for sharing. 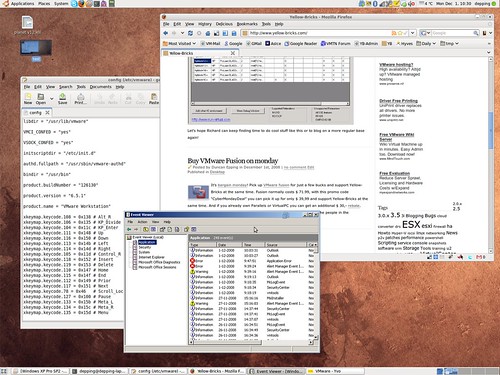 Just had a weird problem with the firefox title bar that wasn’t appearing in Ubuntu 8.10. A quick search on google revealed that a “F11” to enable full screen and a “F11” again to disable full screen was a workaround. But I don’t want to do 2 x F11 every time I start firefox. So I kept trying. For some weird reason the following combination worked:

I just noticed that when running a VM on VMware Workstation 6.5 and Ubuntu 8.10(but this problem probably also occurs on other non-Windows OS’es), you can’t use the arrow keys. But also ctrl-alt-ins isn’t working, which is annoying cause you would have to do it with the mouse. And no arrow keys also means that you can’t browse through your command-line history in Windows or Linux for that matter. Luckily there are two work arounds:

Thanks goes out to AlexPX and Johannes for pointing us out to this solution. There’s also a KB article on this one I just noticed.

I was looking into converting the VIMA appliance from OVF to a regular VM. I wanted to run VIMA directly from VMware Workstation. For the windows version of VMware Workstation there’s a conversion tool, and Arne of ICT-Freak wrote a nice howto. (Although it’s in Dutch you will figure it out cause of the large amount of screenshots!)

I think it’s great that more and more tools are available for Linux!