On twitter John Troyer retweeted a question a couple of days ago which basically came down to the following: When your VM which contains the license server goes down and has been down for longer then 14 days you will not be able to actually boot it up. This is because the grace period has expired.

As a VMware PSO Consultant my recommendation is to make sure you always have a “host based” license file laying around. In a normal situation you don’t need to use it. But in a situation like this it will be very useful because you can just change the license to a host based license instead of a “license server”. This would enable you to actually boot up the License VM. When booted up you could easily revert the changes again and point to your license server again.

I’ve read Ken’s article on Service Console redundancy a couple of times, When is it OK to default on your VI? As I also wrote on the VMTN Blog I really love Ken’s posts so far. They are in depth and Ken knows what he is talking about. His argument, keep it simple, make sense.

Basically, what we’ve done is to let everything default. All the adapters are active, the load balancing method is virtual switch port based and nothing is overridden by the port groups.

But I actually don’t agree with Ken on this one. I never use “virtual port id” load balancing for the Service Console and VMkernel, especially not if I combine these two port groups on one vSwitch.

Call me a control freak if you like, but I want to know which port group is using which vmnic. I always use an Active/Standby scenario for the vSwitch that holds the Service Console and VMkernel. Let me steal Ken’s excellent diagram to give you an idea what I’m talking about: 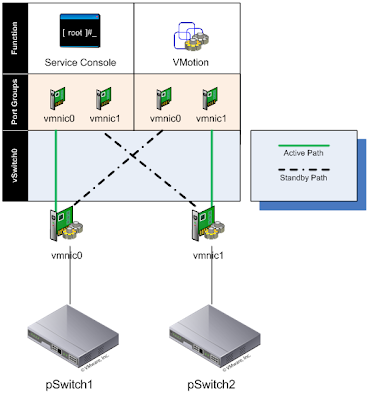 If anything goes wrong there’s full redundancy, which is a must have. The setup can be scripted in a couple of lines and if you need to troubleshoot you know exactly which physical NIC is being used for what purpose. The Service Console and the VMkernel/VMotion are just too important to be guessing where they are running in my opinion, especially in large environments. I want every server to be exactly the same, I don’t want to have the Service Console running on vmnic0 on the first server and on vmnic2 on the next. Like I said… I like to be in control, full control.

For those who want to set this up via a scripted install:

When trying to install the plugin the following error appeared:

Unable to connect to the remote server

I would have expected that in either extension.xml or vci-integrity.xml in the VUM installation directory I would find a misconfigured option but this clearly wasn’t the case. Next stop: the vCenter database.

After clicking around in the database I wanted to run a query, but I still needed to find out which table the rows belonged to. I didn’t wanted to click every single table and start querying so I gave SQL this procedure a chance. The procedure is pretty straight forward, it gives you the option to enter a search string and search the entire database instead of doing “select * from emp” everytime.

After running this procedure I found two entries which still contained the old port values which I updated with the following query:

I did some Oracle SQL courses back in the day when I still worked for Oracle, this is probably the first time I ever used it in real life though. 🙂