The second thing that was revealed was the fact that vSAN is now also running on an ARM-based cluster! Andrei and Daniel showed it working in the AWS Datacenters. Last year this was already briefly discussed when the “vSAN Witness” as a use case was mentioned. This year Andrei validates that that is entirely possible! We are not(!!) talking about using the Raspberry Pi as a witness, this was a cool gimmick for the keynote last year, but doesn’t have sufficient resources today to be used as a witness. The MacchiatoBin, however, can be used as a witness, and this is a tiny device. What is interesting here is that they validated a combination of x86 hosts for vSAN capacity and an ARM-based vSAN witness to run, and it did! 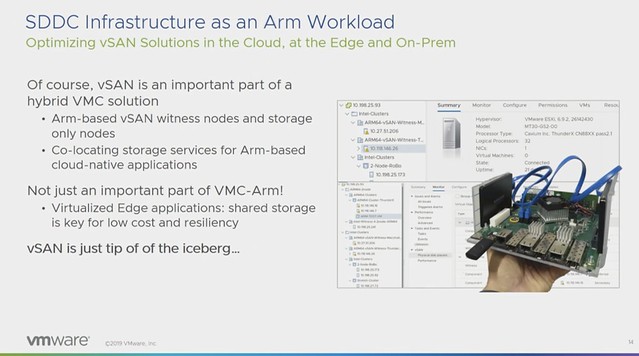 What was also discussed during the session was running ESXi on a SmartNIC. This was also shown during the Tuesday morning keynote by Greg Lavender (VMware’s new CTO). Very interesting solution which now allows you to run multiple hypervisors on a single physical box. In the example Daniel and Andrei had, they showed 4 hypervisors on a single physical box by leveraging 3 SmartNICs, and they also mentioned that they have this working for various SmartNIC vendors and flavors. Why would you do this? Well you could, for instance, have specific workloads that were designed and optimized for Arm running on the SmartNic while the server is an x86 box and is running regular traditional workloads. 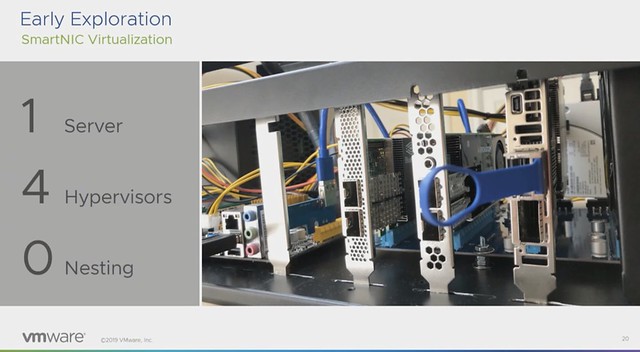 I think it was a very interesting session, with some good reveals, and I am already looking forward to what these guys will have in store for us at VMworld 2020! Anyway, I can’t wait to start testing an Arm based vSAN Witness node. Great job guys.