Last week I was at the German VMUG and at the show I bumped in to a couple of former VMware colleagues (Patrick Pannekoek and Valentin Hamburger) at the Hitachi / HDS booth. I made a joke about how they are now pushing boxes around and one of them said they could give me a cool demo of their Unified Compute Platform. We setup a Webex for this week and Valentin was kind enough to give me a demo of what Unified Compute Platform (UCP from now on) is capable off. I was very impressed to be honest and it does a lot more than I expected.

I am not going to spend a lot of time discussing the physical aspects, all those details are on their website and I feel they are “less relevant” than the integration aspect of a converged offering.

Hitachi UCP for vSphere is a converged solution and takes “converged” to a next level. I cannot call it hyper-converged as it uses traditional storage, but in terms of how they integrate it is more then just a “converged” I would say. First and foremost, there is complete integration with vCenter Server. And when I say integration, I mean that you don’t just get a plugin with some extra screens, but you have additional menu options which are also object/context sensitive. With that meaning that the options you have on a host object will be different from the options you have on a cluster level. UCP comes pre-configured and pre-installed using Auto-Deploy (stateless boots) and several management components installed on a two node cluster (about 10-12 VMs). This includes vCenter Server, Active Directory (when needed), SQL Server, MS WDS for bare metal deployments, Windows Server Update Manager (WSUS). Note that if you have a local AD you can also easily tap in to that, there is no need for a second Active Directory!

As I mentioned, there is a pretty deep integration. Just as an example, all hosts are installed/configured using Auto-Deploy and when you right click on  a host object you can for instance change the PXE boot image that is being used, but also jump directly to the console of the physical host when needed. Very useful if you ask me. Also during the demo Valentin showed how you can easily add a LUN to the whole cluster simply by adding storage on a cluster level through the UCP integration. It automatically gets added to each of the hosts in the cluster and all storage aspects end to end are taken care off. Also, UCP will (through VASA and their own APIs) verify which storage ports should be used so that the environment is balanced. 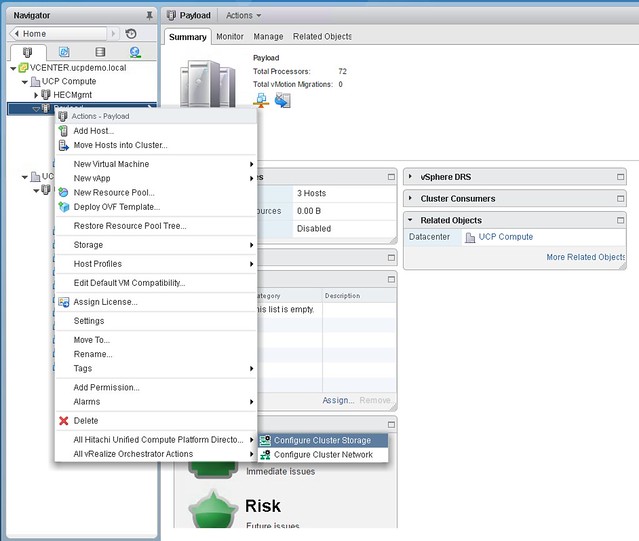 The networking portion was also interesting. If you want to add a new VLAN to an ESXi server you simply add a new port group, UCP Director can then validate the environment if the VLAN exists or not and then if it doesn’t exist it will create these VLANs for you across the network. Of course it will not touch your core network, but all switches that are part of the UCP infrastructure will be configured for you. Yes, I can imagine that sounds a bit scary for the network minded people reading this, but for the virtualization people that sounds like “skipping a lot of steps”.

Also, I liked how they show for instance the ethernet switches in the inventory, it shows a summary for instance of the switch configuration, but also port details, VLAN configuration, which host is connected to which switch port even. Very useful info when doing troubleshooting or when you for instance want to move cables around for whatever reason.

Besides vSphere, UCP also has the ability to do bare metal deployments, this also can be done from within vCenter. It will do the full deployment on a blade in the UCP environment. When it comes to these deployments there are certain Service Templates as they call them that you can configure. This allows you not only to tweak hosts all the way down to a bios level, but also for instance to specify what the cluster should look like where the host should end up in. Do you need DRS, HA, SDRS, vDS, Host Profiles (including syslogging etc)? UCP can do it for you. Yes, SIOC is also supported and can be enabled, and UCP will ensure that the storage used at the backend also is configured in such a way that it is supported (no auto-tiering for instance).

The great thing about this solution, but others like Vblock offer this as well, is that you can apply the profiles/images to new blades, even if you replace a blade it can take on the full identity of the replaced blade making the operational aspects a lot easier.

Now then there is also the automation part. Everything you see in the UI is also exposed through a REST API. Powershell cmdlets have been provided which allow you to create reports in an easy way or to automate aspects you don’t want to touch in the UI. When you use their API one thing that stands out is that Hitachi APIs uses the same IDs as vCenter gives, that makes automation and also understanding how things are connected very easy. “API convergence” is what Valentin called it, and I think that describes it best indeed. (Instead of having an HDS hardware ID that then needs to be matched to vCenter ID etc) After showing Powershell/PowerCLI Valentin went on and showed the vRealize Orchestrator workflows he had developed. For instance one of them allowed you, by using a couple of API calls, to increase the size of a VMFS volume both from a storage perspective as well as the vSphere side. Simply by running 1 vRealize Orchestrator workflow, pretty neat.

Valentin also showed Hitachi Enterprise Cloud, which is basically vRealize Automation, with an HDS theme but also with HDS integration/ Various services were already created and what is cool about this is that it offers a self-service portal to your customers as well. It comes pre-installed and pre-configured with various services pre-created. For instance you can deploy a bare metal Linux machine through vRA/HEC.

Last but not least Valentin also mentioned that there is NSX integration, things like distributed routing, firewalling etc can also be part of your offering. Again it can come pre-installed and pre-configured. UCP Director takes care of the physical network and then NSX takes over by layering VXLAN and the various networking services on top.

Oh and before I forget, I also asked if things like VVols, SRM and even some form of stretched clustering was coming / supported. SRM is supported and UCP Director can control replication for you, whether that is sync or async is besides the point. Stretched clustering is one of those features that is being worked on, but considering the strong interest in stretched in EMEA Valentin hoped it would be available soon. And lastly VVols, as it stands today VVols works fine with UCP, there are however no integration points yet, but again that will be worked on for a future release.

Needless to say, but I was impressed with the demo and what I saw was a very compelling offering by Hitachi Data Systems. When I bumped in to these guys I made a joke about box shovelling, and I am sure that many with me have that perception of Hitachi. However what they showed me proofs that they are much more than those enterprise storage guys. If you are in the market for converged infrastructure, then I would recommend talking to Hitachi as well, they do have a good story. Having said all of that, I realize that I only spend an hour on the phone with these guys and that it was a demo, although very promising I am sure there are gaps or caveats that we haven’t covered.

Thanks Patrick and Valentin for taking the time, great demo and great story when it comes to converged infrastructure!