A couple of months back one of the people I used to work a lot with in the DRS team reaches out to me. He told me that he started a company with some other people I knew and we spoke about the state of the industry and some of the challenges customers faced. Fast forward to today, ZeroStack just came out of stealth and announced to the world what they are building and an A round funding of roughly $ 5.6m.

At the head of the company as CEO we have Ajay Gulati, former VMware employee and most known for Storage IO Control, Storage DRS and DRS. Kiran Bondapalati is the CTO and some may recognize that name as he was a lead architect on Bromium. The DNA of the company is a mix of VMware, Nutanix, Bromium, Cisco, Google an more. Not a bad list I must say

So what are they selling? ZeroStack has developed a private cloud solution which is delivered in two parts:

ZeroStack showed me a demo and getting their appliance up and running took about 15 minutes, the configuration wizard wasn’t unlike EVO:RAIL and looked very easy to run through. The magic however if you ask me isn’t in their configuration section, it is the SaaS based management solution. I stole a diagram from their website which immediately shows the potential.

The SaaS management layer provides you a single pane of glass of all the deployed appliances. These can be in a single site or in multiple sites. You can imagine that especially for ROBO deployments this is very useful, but also in larger environments. Now it doesn’t just show you the physical aspect, it also shows you all the logical constructs that have been created like “projects”. 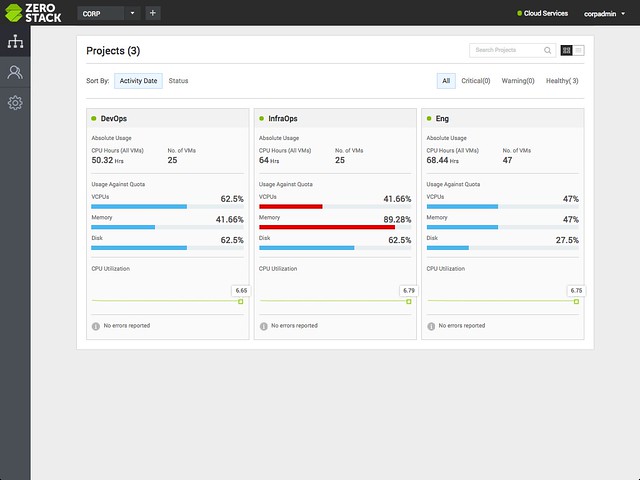 At this part of the demo by the way I got reminded of vCloud Director a bunch of times, and AWS for that matter. ZeroStack allows you to create “tenants” and designate resources to them in the form of projects. These can even have a lease times, which is kind of similar to what vCloud Director offers also.

When looking at the networking aspects of ZeroStack’s solution it also has the familiar constructs like private networks and public networks etc. On top of that networking services like routing / firewall’ing are implemented also in a distributed fashion. And before I forget, everything you see in the UI can also be automated through the APIs which are fully Openstack compatible.

Last but not least we had a discussion about patching and updating. With most systems this is usually the most complicated part. ZeroStack took a very customer friendly approach. The SaaS layer is being updated by them, and this can happen as frequent as once every ten days. The team said they are very receptive to feedback and have a short turnaround time for implementing new functionality, as their goal is to provide most functionality through the SaaS layer. The appliance will be on a different patch/update scheme, probably once every 3 or 6 months, of course depending on the problems fixed and features introduced. The updates are done in a rolling fashion and non-disruptive to your workloads, as expected.

That sounds pretty cool right? Well as always with a 1.0 version there is still some functionality missing. Functionality that is missing in 1.0 is for instance a “high availability” feature for your workloads. If a host fails then you as an admin will need to restart those VMs. Also when it comes to load balancing, there is no “DRS-alike” functionality today. Considering the background of the team though, I can imagine both of those showing up at some point in the near future. It does however mean that for some workloads the 1.0 version may not be the right solution for now. Nevertheless, test/dev and things like cloud native apps could land on it.

All in all, a nice set of announcements and some cool functionality coming. These guys are going to be at VMworld so make sure to stop by their booth if you want to see what they are working on.