When Pebble Time was announced I backed the project on kickstarter based on Joe Baguley and Alan Renouf’s stories. Last week I received it and I’ve played with it a lot I must say and have been impressed from the moment it arrived. Simple things like the box it comes in (hardly any packaging) to the ease of use and how it feels / wears. Lets go over some of the things that stand out for me personally and why I like the watch.

As soon as it arrived I downloaded the Pebble Time app for iOS and added some apps and watch faces. I’ve ended up going with a more classic watch face called Thin for a couple of days, and then switched to Trek V3 which has been on there for 4 days now. I also like “Stock Weather” which shows time/battery/weather and stock details by default. I am looking for a good dual timezone face still which allows me to show time of the current location and the time at “home” so that I always know if I can phone home or not. Changing watch face is really easy, so when I travel I could swap from Trek V3 to a dual timezone face. I may just end up creating something myself as that doesn’t appear to be rocket science either.

One thing I wasn’t completely sold on was the “look” of the watch, and I wasn’t too convinced of how it would feel / wear either. I normally don’t wear watches as they annoy me during work etc. The pebble feels light (42.5 grams) and looks good in my opinion but I do think it is one of those designs which you either like or you don’t. The strap is rubber based and comfortable. I wear the Pebble 24hrs a day. During 15k hikes, during desk work, during crossfit etc and not once did I take it off, which I used to do with other watches.

** Update – June 19th** Literally two hours after I published this I scratched the bezel of my Pebble. I wasn’t doing anything special and didn’t hit concrete or a rock wall or anything like that. Seems like it scratches easily and if you do a search on google for Pebble Time Scratces you will see more users reporting it. Also seem like the screen scratches easily, I just ordered screen/bezel protectors from gadgetwraps. Hope Pebble will fix this over time. ** Update – June 19th** 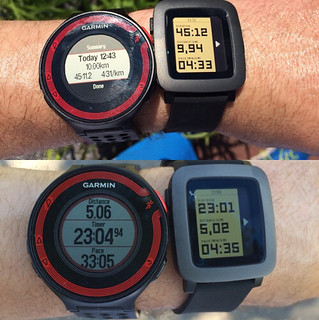 First App I wanted to install was runkeeper, but for some strange reason it wouldn’t install… It took me a while to figure out that Runkeeper is integrated with the Pebble Time to the extend where you don’t need an app. As soon as you open the Runkeeper app on your phone the screen on your watch changes and it shows: distance, time and average pace. My feedback to Runkeeper was to also show the current pace, and I would also love to see the stats per kilometer after you have finished a kilometer. Especially when running this is useful as it allows you to keep pace. You can pause and start your run using the Pebble, you can’t stop it… you will need to grab your phone for that. Other than that it appears to work great, and the fact you don’t need to wear a headphone to hear your stats or grab your phone to check your stats is worth it by itself. There was a difference in distance and average pace as well compared to the Garmin, but it was negligible if you ask me. Some more testing showed though that Runkeeper/Pebble seems less accurate than a dedicated GPS tracking device like Garmin.  (Not the only person who has noticed it.)What I like though about the Pebble is that if for whatever reason someone needs to contact you they actually can and you can decide if you stop your workout or finish it before you respond to an email / text / phonecall. Notifications I guess is what I like!

Talking about notifications, this is of course is a big thing on the Pebble, email / twitter / calendar / whatsapp / sms and much more. I tried to keep it to those 5 though as I didn’t want to find myself constantly dismissing notifications. I use tweetbot and it comes in handy I can specify that I only want notifications for direct messages and mentions from people I follow. This restricts the number of notifications I get. This was one of the big reasons I bought a Pebble by the way. I used to be on my phone checking notifications all the time, and then immidiately responding to email/twitter/facebook etc. Considering the number of messages I receive it resulted on basically holding your phone in your hands for hours a day, driving my family nuts. I can’t respond to anything on my Pebble really, so that prevents me from responding to things which can wait. It is nice that after ~3 minutes notifications are automatically dismissed, would be even better if this was configurable though and I submitted that as a feature request to the Pebble team.

First night wearing it I realized that it would be useful to setup “do not disturb” on my Pebble like I have on my iPhone as it woke me up twice. (I have it setup to vibrate on a notification.) Luckily “do not disturb” is easy to setup. It is described in this article, but in short: go to settings, notifications, do not disturb. Works great and solved my problem. Talking about sleeping, there’s also apps for that of course. I figured I would try a “sleep monitoring” app. I installed Morpheuz and configured the smart alarm which wakes you at an optimal point during your sleep cycle (not during the REM / deep sleep). So far it woke me up at various times between 07:00 and 07:25, I am not the type who has problems getting out of bed to be honest but it seems like it is even easier using Morpheuz. Will continue to use it for a while to see if it really makes a difference or not.

** Update – August 13th** Pebble added the option to instant mute the watch from the do not disturb menu, very useful when you go watch a move or are presenting a sessions etc. I’ve also upped the “do not disturb” hours as getting notifications every second of the day when you are awake can be a bit too much, not sure if being “on call” all of the time is a good thing yet. Now set to 22:00 – 08:00 to not show any notifications. ** Update – August 13th** 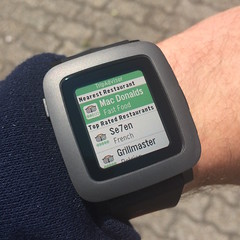 Some other apps which are worth mentioning are Evernote, Transport and TripAdvisor. Evernote is primarily for me to quickly dig up that note and read it. Don’t expect to use it a lot, but can be useful every now and then. TripAdvisor can be useful when looking for a place to eat in the area, couple of clicks and you know what can be found relatively closeby. Transport is probably the most useful of the three, as it will allow you to request an Uber ride from your Pebble. There are plenty of apps you can install / try on the Pebble appstore and I suspect that considering the massive number of Pebble watches sold this will increase steadily.

Last but not least battery life. When it comes to battery life the Pebble is pretty impressive. I’ve played with it extensively the last week and I reach about 4-5 days, Pebble promises up to 7 days with normal usage, but considering the number of notifications I get and how extensive I used it I think 4-5 days is pretty good. It charges pretty fast as well, and it comes with a magnetic usb charging cable which is easy to use and carry with you if needed when traveling.

So I guess the question remains if I would recommend it? Yes, I most definitely would. I like the Pebble watch so far, and I think it would be worth it even if you use it for just notifications!

I think it is fair to say that I was positive about the watch, that kind of already eludes to the fact that my opinion seems to have changed after 6 months. Well not really about the Pebble to be honest, I still think it is a decent device and it still does what I expect it to do, plus compared to the Apple Watch for instance it is relatively cheap. So what is the problem?

I didn’t really think about it until I read this article on readwrite. I had taken off my Pebble a couple of months ago and wanted to see how I would get on without it. Did I miss it? Did I really need it? What do I find useful and what don’t I find useful? Well first off all, what I did not like… I think the author James King of readwrite is spot on:

I couldn’t put my finger on exactly the moment that things turned sour, but the passion started to ebb away. Little things started to irk me—too many notifications, too many little reminders. The things that excited me in the first weeks were the very things that made me want to retreat.

This is exactly my feeling about the device. What I felt was very useful the first week, notifications and reminders, started to become annoying and distracting over time. There are too many emails/messages (different services) coming in on a daily basis and every time the watch vibrates or the screen lights up you have to glance over it. It is like that little “red light” on the Blackberry back in the days, at least to me it is. In the meanwhile, the person you are having a conversation with is wondering why you are looking at your watch and if you need to be somewhere. That is why I took it off, and to be fair I didn’t miss it, and I didn’t put it back on again, which I guess says enough.

Of course there are plenty of things to like about it, but when I look at my original post above and think about how I used it, it is clear that to me it is an extension of my phone, a different UI which doesn’t add enough value to me personally. What I hoped is that it would help me focus more on things that matter, but that doesn’t appear to be the case.