For the last months I have people asking me why on earth I was on google talk / messenger in the middle of the night, but then did not respond when they said hi. It appears that my Macbook had been waking up roughly every hour while I had put it to sleep.

At first I thought it was the messenger software I was running called Adium. But after closely checking this didn’t seem to be the problem. Then I started digging and checked my log files. My log files did reveal something:

So I did a quick search on “RTC” and stumbled on this article which explained why this was happening. The article refers to an Apple KB, which hints at what to disable. When disabling “Wake for network access” as suggested by the KB I noticed another feature called “Power Nap”. It appears that Power Nap also enables your Mac to do certain things on a regular interval. For instance it can allow for a backup to occur or it will check email every hour. 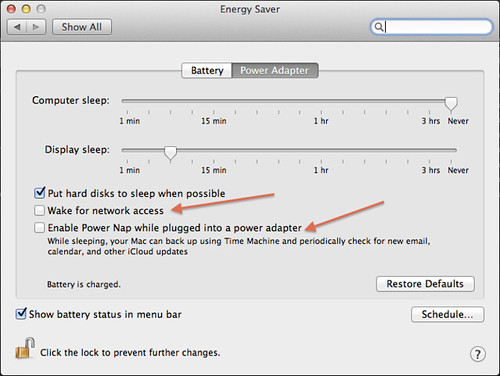 In my case there is no need to power-on in the middle of the night to do these things, so I disabled both “Wake for network access” and “Power Nap”. There is some more info about “Power Nap” to be found in this KB article.