VMworld has always been the craziest week of the year for me personally and 2012 was no exception. Being closely involved with the vCloud Suite launch I had an idea around what to expect, but I would not have expected the week to be this intense.

It is going to take me a couple of weeks to properly recover, but it was worth it. This report gives an idea of all that was going on in “my world” at VMworld 2012 in San Francisco.

My VMworld started on Sunday at TAM day with the Birds of a Feather (BoF) lunch. These lunches are particularly interesting as you get to talk to customers in an informal setting. I was part of the BC/DR table and most of the discussions were around stretched VLANs, application discovery and re-ip’ing. I guess common operational and architectural problems people face…

After the BoF lunch it was time for the Technical Marketing panel session. In this session our TAM program customers had the opportunity to ask questions on  any topic. There was a huge variety in questions but the conversation was still dominated by Availability, Network and Storage. One thing what stood out to me were the questions around stretched clustering. It seems that stretched cluster environments are in an uplift, many people are researching it. After our session we bumped in to Carl Eschenbach and had the opportunity to present him our new book… which he appreciated very much.

The day ended with the infamous community event, VMunderground. What can I say about this event? I have a lot of respect for Theron, Sean and Brian for organizing this… It takes a lot of time / effort to set this up. Keep it up guys!

On Monday VMworld started for most people and my schedule was packed. The day started with an excellent keynote. The handover from Paul Maritz to Pat Gelsinger was impressive; a standing ovation is not something you often see at a tech conference. Pat Gelsinger spoke about the strategic direction, but I guess one thing that everyone will remember is the removal of VRAM allocation. On top of that the vCloud Suite was announced. After the keynote I spoke with several people and they were excited about the suite. Just the fact that they can upgrade from Enterprise Plus to the vCloud Suite standard for just $ 1. (More details here around promo upgrade packages and the datasheet can be found here.)

One thing I always thoroughly enjoy are the demos during the keynote. Serge Maskalik demoed our new security and networking features in 5.1 and I know many were impressed by this. Ravi Soundararajan equally impressed people with his social monitoring proof of concept. All in all a great keynote which I would like to recommend everyone to watch the replay online!

I ran over to Moscone West when the keynote finished as my first official session was about to start. This session was titled “INF-VSP1168 – Architecting a Cloud Infrastructure” and I am proud to say that this session made the VMworld Top 10. During this panel session we discussed the various design decisions and operational implications related to the infrastructure (vSphere) required to build large scale vCloud deployments. Several key enhancements in vSphere 5.1 were called out to emphasize the scalability of the vCloud Suite.

Up next was an Expert 1:1 slot. I was scheduled during lunch so did not expect anyone to show up. I was surprised the slot filled up and ended discussing vCloud Director for an hour with two attendees.

Last thing on my agenda for today was the “INF-VSP1504 – Ask the Expert vBloggers” session. This was an open Q&A session panel session with well known community members like Frank Denneman, Scott Lowe, Chad Sakac and Rick Scherer. As always the sessions was storage and availability heavy. There was one very interesting question which I wanted to call out and that was around the overhead of virtual machine “swap files”.  To get around this some mentioned using reservations (please don’t go there, memory is more expensive than disk for sure) or the use of a thin provisioned deduplicated datastore. Judging by the numbers of heads nodding during this discussion I am guessing it would be welcomed if vSphere had a build-in solution for decreasing the overhead around this, if anyone wants to chime in feel free to leave a comment.

For me the day ended with the CloudPhysics (+ Convergent.io and Fusion I/O) reception / party. CloudPhysics organized a book signing and I think Frank and I signed roughly 200 copies of the vSphere 5.1 Clustering Deepdive. On top of that several prizes were handed out (once again congrats Bilal!) to the people with the highest score on the CloudPhysics challenge. Congrats to those who won, and I want to thank all who contributed. I guess one highlight of this party was meeting Mendel Rosenblum, he is a true legend and a brilliant mind!

Day 2 started with an excellent keynote once again. The theme for today was End User Computing. Vittorio once again, just like last year, did an excellent job of demoing new technology like Mirage. I think his alternative acronym for BYOD (Bring Your Own Desktop) SYOM (Spend Your Own Money) was almost a trending topic on twitter for a minute. Another demo which blew people away was the Appshift demo. It seems to be a problem to which the inner-geek in us can relate to. Various people wrote about Appshift so I am not going to go in to any details here, but is all about user experience virtualization.

After the keynote I headed over to my first session of the day, “BCO1159 – Architecting and Operating a vSphere Metro Storage Cluster”. Lee Dilworth and I discussed architectural and operational considerations and caveats. A commonly heard comment after the session was “I think I need to revise some operational procedures”. Many people realized during the session that from a storage perspective a stretched cluster may look like a seamless solution, this is not the case for platforms build on top of it and there are caveats and operational considerations.

After my session I headed over to my Group Discussion of which the topic was vCloud Suite architecture. These are typically informal discussion out of which a lot of valuable feedback can be gathered. There were some great discussions and especially the question around “integration” kicked things off. I was not surprised that people would love to see a fully integrated disaster recovery solution for vCloud Director. More surprising though was that various people mentioned they would love to see better integration between VMware View and vCloud Director to enable multi-tenant View solutions.

First session I was able to attend, instead of present, was “INF-STO2192 – Tech Preview of a Software-defined Storage Technology” by Christos Karamanolis and Kiran Madnani. There were long lines at every session so I was lucky I could get in. I attended this session as I was interested in how the audience would respond to this technology preview internally knows as “vSAN”. I guess I can safely say that people were excited about vSAN, that observation is based on the applause Christos received after the demo and the many comments on twitter. More on this session later this week!

Tuesday night we hopped between different parties: Zerto & Pure Storage –> Nimble –> Dell  & Wyse –> Veeam. Great evening, met a lot of cool people and made some new friends! Thanks to all our partners for throwing these events, much appreciated!

I started day 3, Wednesday, with attending a session about PowerCLI best practices hosted by the gurus of automation Alan Renouf and Luc Dekens. I particularly liked this session because of the demos Alan and Luc prepared and showed. They showed some cool new PowerCLI cmdlets and gave many great tips, judging by the large number of people in the room it is safe to say that automation is key in many environments.

At lunch I had my expert discussion group. Each half hour session was with a group of five people. The first discussion was primarily around storage and vCloud Director. Many were interested in how Profile Driven Storage enhanced vCloud Director. Also a brief discussion about vCloud Distributed Storage and how I felt this would change the world, all participants were most definitely excited about vCloud Distributed Storage and felt that once again VMware is ahead of competition.  The second discussion was more around vSphere architecture and all the various aspects like NIC teaming, storage zoning, availability and disaster recovery.

Next on my agenda was a repeat of “BCO1159 – Architecting and Operating a vSphere Metro Storage Cluster”. Again, the feedback was crystal clear… “We need vCenter to be site aware and integrate with storage to reduce the current operational and architectural overhead.” We wrapped up the day with the VMworld Party and the VMware CTO party. The CTO party was an invite only event where vExperts (VMware community members), Engineering, Executives, Customers and Office of CTO met in an informal setting. I found it very useful, as it allowed me to meet up with people who I normally would not meet up with.

Of course we ended up at the VMworld party, fun evening with background music by Bon Jovi.

Final day, day 4. I had just one session on my agenda which was a repeat of “INF-VSP1168 – Architecting a Cloud Infrastructure”. I felt that this session was better received overall, probably because we added more technical facts in there. Even though the session is advertized as “architectural” it still seems people expect to be overloaded with technical facts.I will try to factor that in next year.

That was it for me… I was drained. I still had a “team drink” to attend and after that a couple of us ended up at Burma Superstar, what a great place, thanks Pablo for the tip!

Athough it is going to take me weeks to recover it was a great show though, and I hope to see all of you in Barcelona next month. Once again, feel free to come up and say hi in Barcelona. I really enjoyed talking to each and every single person in San Francisco… 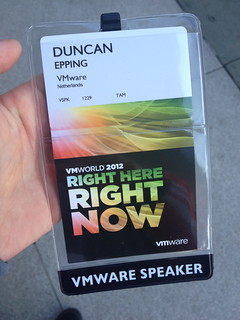