I’ve seen multiple people mentioning this feature and saw William posting a hack on how to fool vSphere (feature is part of vSphere 5 to be clear) into thinking it has access to SSD disks while this might not be the case. One thing I noticed is that there seems to be a misunderstanding of what this swap to host cache actually is / does and that is probably due to the fact that some tend to call it swap to SSD. Yes it is true, ultimately your VM would be swapping to SSD but it is not just a swap file on SSD or better said it is NOT a regular virtual machine swap file on SSD.

When I logged in to my environment first thing I noticed was that my SSD backed datastore was not tagged as SSD. First thing I wanted to do was tag it as SSD, as mentioned William already described this in his article and it is well documented in our own documentation as well so I followed it. This is what I did to get it working:

Next would be to enable the feature… When you go to your host and click on the “Configuration Tab” there should be a section called “Host Cache Configuration” on the left. When you’ve correctly tagged your SSD it should look like this: 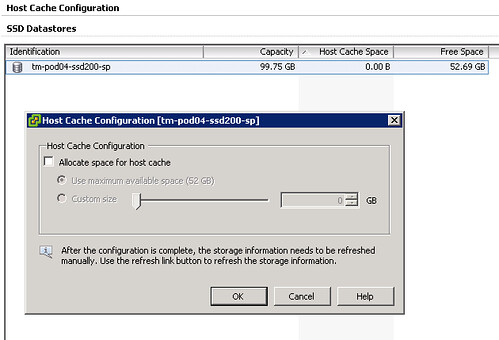 Please note that I already had a VM running on the device and hence the reason it is showing some of the space as being in use on this device, normally I would recommend using a drive dedicated for swap. Next step would be enabling the feature and you can do that by opening the pop-up window (right click your datastore and select “Properties”). This is what I did:

Now there is no science to this value as I just wanted to enable it and test the feature. What happened when we enabled it? We allocated space on this LUN so something must have been done with it? I opened up the datastore browser and I noticed a new folder was created on this particular VMFS volume: 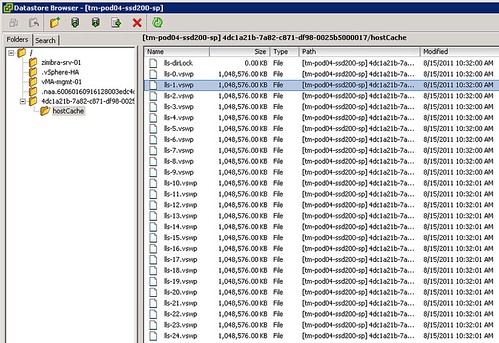 Not only did it create a folder structure but it also created 25 x 1GB .vswp files. Now before we go any further, please note that this is a per host setting. Each host will need to have its own Host Cache assigned so it probably makes more sense to use a local SSD drive instead of a SAN volume. Some of you might say but what about resiliency? Well if your host fails the VMs will need to restart anyway so that data is no longer relevant, in terms of disk resiliency you should definitely consider a RAID-1 configuration. Generally speaking SAN volumes are much more expensive than local volumes and using local volumes also removes the latency caused by the storage network. Compared to the latency of a SSD (less than 100 μs), network latency can be significant. So lets recap that in a nice design principal:

Basic design principle
Using “Swap to host cache” will severely reduce the performance impact of VMkernel swapping. It is recommended to use a local SSD drive to elimate any network latency and to optimize for performance.

How does it work? Well fairly straight forward actually. When there is severe memory pressure and the hypervisor needs to swap memory pages to disk it will swap to the .vswp files on the SSD drive instead. Each of these, in my case, 25 files are shared amongst the VMs running on this host. Now you will probably wonder how you know if the host is using this Host Cache or not, that can of course simply be validated by looking at the performance statistics within vCenter. It contains a couple of new metrics of which “Swap in from host cache” and “Swap out to host cache” (and the “rate”…) metrics are most important to monitor. (Yes, esxtop has metrics as well to monitor it namely LLSWR/s  and LLSWW/s)

What if you want to resize your Host Cache and it is already in use? Well simply said the Host Cache is optimized to allow for this scenario. If the Host Cache is completely filled memory pages will need to be copied to the regular .vswp file. This could mean that the process takes longer than expected and of course it is not a recommended practice as it will decrease performance for your VMs as these pages more than likely at some point will need to be swapped in. Resizing however can be done on the fly, no need to vMotion away your VMs. Just adjust the slider and wait for the process to complete. If you decide to complete remove all host cache for what ever reason than all relevant data will be migrated to the regular .vswp.

What if the Host Cache is full? Normally it shouldn’t even reach that state, but when you run out of space in the host cache pages will be migrated from your host cache to your regular vswap file and it is first in first out in this case, which should be the right policy for most workloads. Now chances of course of having memory pressure to the extend where you fill up a local SSD are small, but it is good to realize what the impact is. If you are going down the path of local SSD drives with Host Cache enabled and will be overcommitting it might be good to do the math and ensure that you have enough cache available to keep these pages in cache rather than on rotating media. I prefer to keep it simple though and would probably recommend to equal the size of your hosts memory. In the case of a host with 128GB RAM that would be a 128GB SSD. Yes this might be overkill, but the price difference between 64GB and 128GB is probably neglect-able.

Basic design principle
Monitor swap usage. Although “Swap to host cache” will reduce the impact of VMkernel swapping it will not eliminate it. Take your expected consolidation ratio into account including your HA (N-X) strategy and size accordingly. Or keep it simple and just use the same size as physical memory.

One interesting use case could be to place all regular swap files on very cheap shared storage (RAID5 of SATA drives) or even local SATA storage using the “VM swapfile location” (aka. Host local swap) feature. Then install a host cache for any host these VMs can be migrated to. This should give you the performance of a SSD while maintaining most of the cost saving of the cheap storage. Please note that the host cache is a per-host feature. Hence in the time of a vMotion all data from the cache will need to be transferred to the destination host. This will impact the time a vMotion takes. Unless your vMotions are time critical, this should not be an issue though. I have been told that VMware will publish a KB article with advise how to buy the right SSDs for this feature.

Summarizing, Swap to SSD is what people have been calling this feature and that is not what it is. This is a mechanism that caches memory pages to SSD and should be referred to as “Swap to host cache”. Depending on how you do the math all memory pages can be swapped to and from SSD. If there is insufficient space available memory pages will move over to the regular .vswp file. Use local SSD drives to avoid any latency associated with your storage network and to minimize costs.