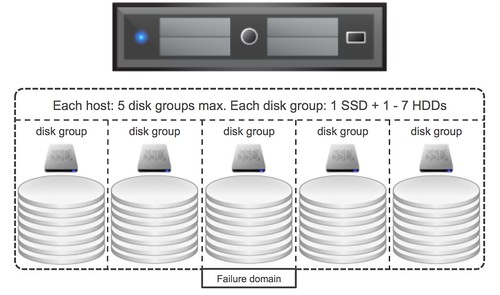 I have been playing a lot with vSphere Virtual SAN (VSAN) in the last couple of months… I figured I would write down some of my thoughts around creating a hardware platform or constructing the virtual environment when it comes to VSAN. There are some recommended practices and there are some constraints, I aim to use this blog post to gather all of these Virtual SAN design considerations. Please read the VSAN introduction, how to install VSAN in your virtual lab and “How do you know where an object is located” to get a better understanding of the product. There is a long list of VSAN blogs that can be found here: vmwa.re/vsan

The below is all based on vSphere 5.5 Virtual SAN (public) Beta and my interpretation and thoughts based on various conversations with colleagues, engineering and reading various documents.

That is it for now. When more comes to mind I will add it to the list!

Almost on a daily basis, I get questions from colleagues and customers about specific advanced settings. Somehow they spotted a vSphere advanced setting and wonder if they should set it. They go on a hunt to figure out what it is this specific vSphere advanced setting does and typically find a description on a random website that makes it sound like it is a good idea to configure it. I even had someone asking if I could give a list of all optimized values for the advanced kernel parameters recently. My answer was short and maybe a bit blunt, but I think it was clear:

If you have implemented an advanced setting, document it and with every update or upgrade validate it is still applicable to that specific version or not. (If you are aspiring to be a VCDX, this is key.) If it no longer applies, remove revert to default!

I guess many people have been waiting on official statements around this. Although this was posted a couple of days ago I wanted to make sure everyone has seen it as it could be crucial for your Design / Environment.

Source
As of today, the following support scenarios are being updated, for Exchange 2010 SP1, and later:

In other words, enabling VMware HA and VMware DRS is perfectly supported for your Exchange 2010 SP1 environment allowing for greater flexibility! Make sure you reconsider some of the design / implementation decisions you made in the past when these constraints still applied. Also, if you are re-evaluating your mail solution… check out Zimbra. I’ve been using it for over 6 months and couldn’t be happier. I used to be a huge Exchange/Outlook fan and expected that I would not be able to adjust to another platform, but Zimbra is in my opinion on par with Exchange and those little extras like the zimlets just make your life easier. (Integrating with applications, websites, social networks… you name it)

I was reading Richard Garsthagen’s article about anti-virus solutions yesterday and decided that this deserved a little bit of extra attention as it is an often overlooked area when it comes to architecture and impact. As Richard points out the difference in terms of load that it generates and overhead is enormous. All of these combined will most definitely result in an increase of consolidation ratio. Not only that but is will also seriously lower the risk during for instance a VDI boot storm but also think about the impact of HA initiated restarts. This could cause an enormous amount of IOps and CPU/Memory overhead which in its turn could impact the other virtual machines.

I guess there is no point in rehashing what is written in the whitepaper of what Richard wrote, I just want to point out the whitepaper as I believe it is a good read. As always results may vary but it is pretty obvious that from an architectural and operational perspective End Point Security is most definitely worth looking into and I cannot wait for more vendors to jump on the bandwagon. Download the tolly report here. (I personally found the disk results very interesting…)