I had a question last week about Storage vMotion and when Write-same vs XCopy was used. I was confident I knew the answer, but I figured I would do some testing. So what was the question exactly and the scenario I tested?

So that is what I tested. I created this virtual machine with two disks of which one being thick and about half filled and the other “eager zero thick”. I did a Storage vMotion to a different datastore (same format as source) and checked esxtop while the migration was on going:

In other words, when preserving the disk format the “XCopy” command (CLONE_WR) is issued by the hypervisor. The reason for this is when doing a SvMotion and keeping the disk formats the same the copy command is initiated for a chunk but the hypervisor doesn’t read the block before the command is initiated to the array. Hence the reason the hypervisor doesn’t know these are “zero” blocks in the “eager zero thick” disk and goes through the process of copy offload to the array.

Of course it would interesting to see what happens if I tell during the migration that all disks will need to become “eager zero thick”, remember one of the disks was “lazy zero thick”:

It is clear that in this case it does zero out the blocks (ZERO). As there is a range of blocks which aren’t used by the virtual machine yet the hypervisor ensures these blocks are zeroed so that they can be used immediately when the virtual machine wants to… as that is what the admin requested “eager zero thick” aka pre-zeroed.

For those who want to play around with this, check esxtop and then the VAAI stats. I described how-to in this article.

A while back I posted that 5.0 U2 re-introduced the renaming behavior for VM file names. I was just informed by our excellent Support Team that unfortunately the release notes missed something crucial and Storage vMotion does not rename files by default. In order to get the renaming behavior you will have to set an advanced setting within vCenter.. This is how you do it:

Now the renaming of the files during the SvMotion process should work again!
All of you who need this functionality, please make sure to add this advanced setting. 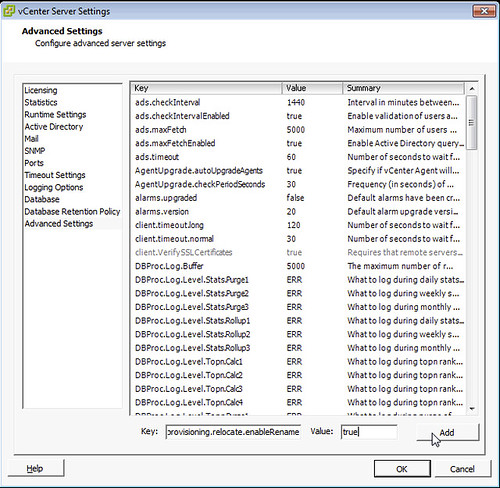 I have been pushing for this heavily internally together with Frank Denneman and it pleases me to say that it is finally back… You can rename your virtual machine files again using Storage vMotion as of 5.0 u2.

This issue is resolved in this release

Those who want to know what else is fixed, you can find the full release notes here of both ESXi 5.0 U2 and vCenter 5.0 U2:

There’s a nice new enhancement to vMotion in vSphere 5.1. (and no, it doesn’t have specific name :-)) With vSphere 5.1 you can migrate virtual machines live without needing “shared storage”. In other words you can vMotion virtual machines between ESXi hosts with only local storage. It is very simple:

I am sure Frank Denneman is going to dive in to this soon so I won’t elaborate on how the process it self works. There’s already a blogpost out by Sreekant Setty which has some more details and which points to a nice white paper about vMotion / SvMotion performance.