Clearly VMworld is around the corner as many new products, releases and company announcements are being done this week and next. Last week I had the opportunity to catch up with Sirish Raghuram, Platform9‘s CEO. For those who don’t know who/what/where I recommend reading the two articles I wrote earlier this year. In short, Platform9 is a SaaS based private cloud management solution which leverages OpenStack. By Platform9 also described as “Openstack-as-a-Service”.

Over the last months Platform9 has grown to 27 people and is now actively focussing on scaling marketing and sales. They have already hired some very strong people from companies like Rackspace, EMC, Metacloud and VMware. Their series A funding was $ 4.5m by Redpoint Ventures, and now they announced a $ 10m Series B round which was led by Menlo Ventures and included Redpoint Ventures. Considering the state of Openstack startup community that is a big achievement if you ask me. The company has seen good revenue momentum in first two quarters of sales with QoQ growth of 200%, multiple site wide license agreements for 400+ servers in each quarter and customer deployments in 17 countries

So what is being announced? The GA of support for vSphere which has been in Beta since early this year. Basically this means that as of this release you can now manage local KVM and vSphere hosts using Platform9’s solution. What I like about their solution is that it is very easy to configure, and it is SaaS based so no worries about installing/configuring/upgrading/updating or maintenance of the management solution itself. Install / Configure takes less than 5 minutes. Basically you point it at your vCenter Server, a proxy VM will be deploy and then resources will be sucked in. The architecture for vSphere looks like this: 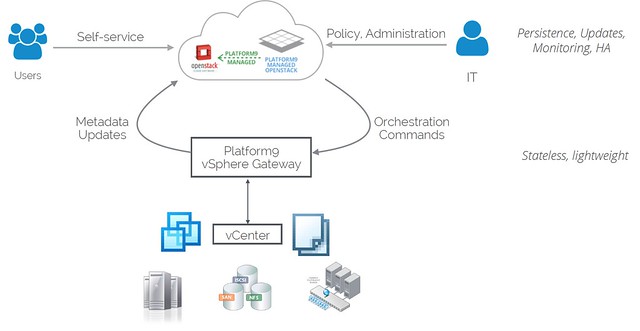 The cool thing is that it will integrate with existing vSphere deployments and if you have people managing vSphere with vCenter and they make changes then Platform9 is smart enough to recognize that and reconcile. On top of that all vSphere templates are also automatically pulled in so you can use those immediately when provisioning new VMs through Platform9. Managing VMs through Platform9 is very easy, but also if you are familiar with the OpenStack APIs then automating any aspect of Platform9 is a breeze as it is fully compatible. When it comes to managing resources and workloads, I think the UI speaks for itself. Very straight forward, very easy to use. Adding hosts, deploying new workloads or monitoring capacity, typically all done within a few clicks. When it comes to vSphere they also support things like the Distributed Switch and have support for NSX around the corner, for those who have the need for advanced networking / isolation / security etc.

Platform9 also introduces auto-scaling capabilities based on resource alarms and application templates. Both scaling-up and scaling-down of your workloads when needed is supported, which is something that comes up on a regular basis with customers I talk to. Platform9 can take care of the infrastructure side of scaling out, you worry about creating that scale-out application architecture, which is difficult enough as it is. 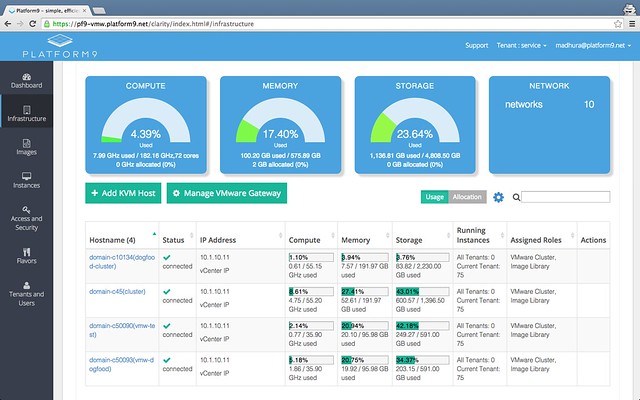 When it comes to their SaaS based platform it is good to know that their platform is not shared between customers. Which means that there is no risk of one customer high-jacking the environment of another customer. Also, the platform will scale independently and will scale automatically as your local environment grows. No need to worry about any of those aspects any longer, and of course because it is SaaS based Platform9 will take care of patching/updating/upgrading etc.

Personally I would love to see a couple of things added, I would find it useful if Platform9 could take care of Network Isolation… Just like Lab Manager was capable of doing in the past. It would also be great if Platform9 could manage “stand alone” ESXi hosts instead of having being pointed to vCenter Server. I do understand that brings some constraints etc, but it could be a nice feature… Either way, I like the single pane of glass they offer today, it can only get better. Nice job Platform9, keep those updates coming!