I arrived yesterday in San Francisco, still jet lagged from my previous trip (came back home from SFO on Tuesday). After a nice walk we had some dinner and stopped by at vBeers… Was nice to talk to some folks I have never met before and an interesting conversation around VCDX for networking and storage. Also bumped in to some EMC and NetApp friends, and a bunch of Coho Data guys at the hotel. After that I called it quits and went to bed early, only to wake up early again due to jet lag, doze off again and then woke up because my whole room was shaking. I have never experienced an earth quake before, the 6.1 earth quake in Napa was a strange way of being welcome to SF for VMworld. Judging by the tweets around the time I wasn’t the only who was freaked out. I guess being on the 15th floor of a hotel doesn’t help either as it only amplifies the experience. Anyway, after that it was time for a run with some of my European colleagues, 15.5KM is not bad for a jetlagged earthquacked Sunday morning.

I didn’t have much planned for today, originally my schedule was booked but due to some changes around when we could start talking about upcoming products things got cancelled. So I got registered… received my nice shiny badge, and prepped for my upcoming sessions. 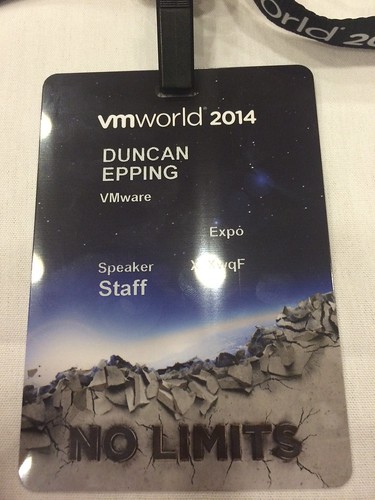 I guess for me the madness starts on Monday. For those who want to attend one of my sessions, here is the list: