I wrote an article about Datrium DVX when Datrium came out of stealth about 6 months ago. I am not going to rehash that as I think it was pretty clear around what Datrium DVX is. Datrium DVX is a combination of “host local data services” and network accessed storage capacity. This basically means that you utilize local flash resources for read caching (deduped before stored on the flash tier), writes will go directly to the “NetShelf” as Datrium calls it, which is basically your persistent layer. The write is compressed by the way before it is send to the NetShelf, and on theNetShelf itself there is a also a dedupe process that runs periodically to “collect garbage” and optimize the system for capacity.

I had a chat with the team from Datrium and we spoke about what was new with GA and stuff that I hadn’t covered yet in my previous article. Some of the facts from that call:

I guess that says it all. Well there’s a bit around support for hypervisors and things like VVols and VAAI. Today Datrium only supports vSphere, and it wasn’t clear if and when other hypervisors would be supported. When it comes to VAAI it was mentioned that VAAI clones are fully supported as it stands today. On top of that Datrium is also working hard on enabling a VVol capable solution, they have joined the VVol program and are looking forward to release their VVol capable software, I am sure that when they do I will talk to them again.

A couple of things are missing in todays offering, which would definitely be nice to have, or in some cases even a must. Native replication and array based snapshots for instance. Today Datrium partners with Zerto, and of course VMware customers can use vSphere Replication for free. Snapshots rely on vSphere today, but there are plans to have them natively on the array at some point. Also, when you run out of capacity and you add a NetShelf, this will become a new mountpoint, it would be nice if this was scale-out, and the Datrium folks agreed but didn’t commit to anything (of course). Overall I think it is an interesting solution, and with 30 install sites for the beta I think it is safe to say that they will be a player to consider, but only time will tell.

Thanks guys for taking the time to brief me. 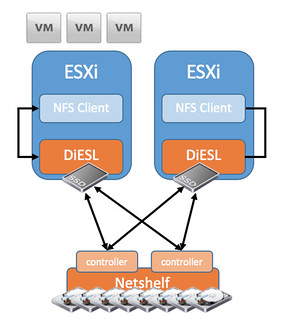