By default your VirtualCenter logfiles are stored in a temp folder(as of 2.5 they are stored in: C:\Documents and Settings\All Users\Application Data\VMware\VMware VirtualCenter\Logs). VMware Wolf wrote a nice article about all the locations these log files are stuffed. For some reason I don’t get a pleasant feeling when I store my VirtualCenter (VPXD) log files in a temporary windows directory or the profile directory for that matter(thanks for the comment!!). If there’s one thing admin’s clean up first when they tend to run out of diskspace it’s their temp directory… it’s called temp for a good reason!

So in order to prevent this you could change the location of the VPXD log files very easily. Edit “vpxd.cfg”. It’s located here: %AllUsersProfile%\Application Data\VMware\VMware VirtualCenter\.

Add the following lines in the “<config>” section and change the path accordingly:

Seva, a VMware Technical Account Manager, put together a cool table with the implications of a VirtualCenter crash. This is a follow up to my blog about VirtualCenter getting more important by the minute. I think the most important thing to remember is that the VM’s keep running whatever happens to your VC Server and HA will still work if VC fails, well except for adding hosts to the cluster of course. So reinstalling the VirtualCenter server and re-adding the hosts is still possible, but in my opinion not recommended. Especially when you’ve got complex Resource Pools and Folder structures set up.

Open this link to the PDF or click on the picture below. 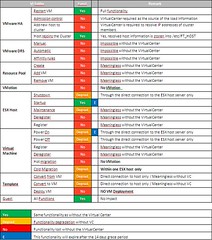 I’ve been asking around why the default isolation response has been changed from “power off” to “leave powered on”. It seems that this is done because a lot of customers had VM’s being powered off unnecessary. This happened because the service console or physical switches weren’t setup redundant and thus caused HA to kick in. In other words, for those having complete redundancy, switches and nics, change the default back to “power off” or use the new option “Shutdown VM”.

Shutdown VM requires VMware Tools to be installed. If HA is unable to shutdown the VM within 5 minutes it will be powered down. I would prefer this option, especially when you virtualized services like Exchange, SQL, Oracle etc.

There has always been much discussion about the VirtualCenter database if it was important enough to back it up. Most people agreed that the information that the database held was not important. A datacenter and cluster could be easily reconfigured and all other settings were saved on the host. HA wasn’t even using VirtualCenter, and DRS well a day without DRS is something most companies could afford.

I guess it’s time to start building the VirtualCenter server in a different way. Going virtual might be the best solution for having a highly available VirtualCenter server and database. But what about actually backing up the Database, via a maintenance plan or a backup engine. In time the VirtualCenter database will only get more important, especially when for instance DPM evolves. I can imagine DPM will detect trends and switch servers on and off accordingly.

Anyway, the only message I wanted to get out is start backing up that database!

How about backing up that dreadful application/server that you couldn’t or did not wanted to virtualize to your ESX environment? It could be useful to have a copy of a server that for whatever reason you did not virtualize. The new VMware Converter plugin for VirtualCenter gives you this option. You can create a reoccurring schedule for a p2v, you can even save several version of the converted machine. How cool is that! Seems like a great way to backup a machine!

How do I do this: 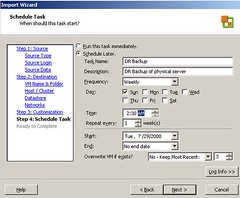