I did a vSAN File Services Considerations posts earlier this year and recently updated it to include some of the changes that were introduced for vSAN 7.0 U1. Considering vSAN HCI Mesh, aka Datastore Sharing, is also a brand new feature, I figured I would do a similar post. In this post, I am not going to do a deep-dive of the architecture, but I simply want to go over some of the considerations and best practices for implementing vSAN HCI Mesh. I collected these recommendations, and requirements, from our documentation and some VMworld sessions.

First of all, for those who don’t know, vSAN HCI Mesh allows you to mount a remote vSAN Datastore to a vSAN Cluster. In other words, if you have two (or more) vSAN Clusters, you can access the storage capacity from a cluster remotely. Why would you? Well, you can imagine that one cluster is running out of disk space for instance. Or, you may have a hybrid cluster and an all-flash cluster and want to provision a VM from a compute perspective on hybrid, but from a storage point of view on all-flash. By using Datastore Sharing you can now mount the other vSAN Datastore and use it as if it is a local datastore.

Let’s take a look at the architecture of the solution, which is displayed in the diagram below. The big difference between a “local” vSAN datastore and HCI Mesh is the fact that the DOM Client and the DOM Owner have been split up. So instead of having the “DOM Owner” locally, it is now remote on the remote cluster, pretty smart implementation if you ask me. Now as you can imagine, this will have some impact on your network requirements/design. 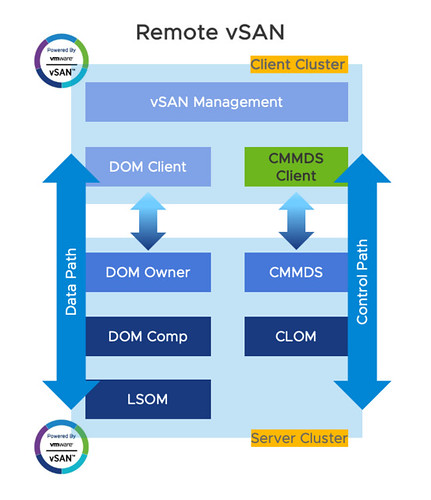 Let’s list out all of the recommendations, considerations, and requirements for those who are planning on using HCI Mesh.

One last thing I want to mention around HA, as this is different than in a “normal” vSAN cluster. When the connection between the local and the remote cluster fails, and as a result a VM is impacted, this will trigger an “APD” (all paths down) response. The APD is declared after 60 seconds, after which the APD response (restart) is triggered automatically after 180 seconds. Mind that this is different than with an APD response with traditional storage, as there it will take 140 seconds before the APD is declared. Note, this does mean that you need to have VMCP aka “Datastore with APD” configured with HA.

Hope that helps. I will be updating the page when I find new considerations.