A week ago I already touched on this topic but I wanted to get a better understand for myself what could go wrong in these situations and how vSphere 4.1 solves this issue.

A scenario where and when this can occur would be the following: 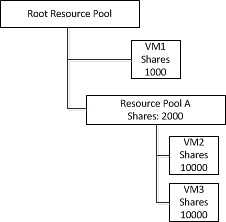 When the host would fail both VM2 and VM3 will end up on the same level as VM1. However as a custom shares value of 10000 was specified on both VM2 and VM3 they will completely blow away VM1 in times of contention. This is depicted in the following diagram: 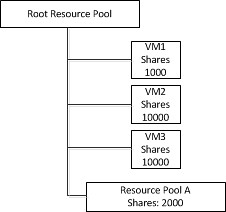 This situation would persist until the next invocation of DRS would re-parent the virtual machine to it’s original Resource Pool. To address this issue as of vSphere 4.1 DRS will flatten the virtual machine’s shares and limits before fail-over. This flattening process ensures that the VM will get the resources it would have received if it would have been failed over to the correct Resource Pool. This scenario is depicted in the following diagram. Note that both VM2 and VM3 are placed under the Root Resource Pool with a shares value of 1000. 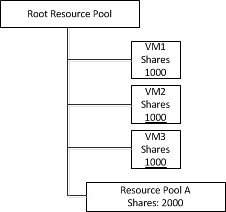 Of course when DRS is invoked  both VM2 and VM3 will be re-parented under Resource Pool A and will receive the amount of shares they had originally assigned again. I hope this makes it a bit more clear what this “flattened shares” mechanism actually does.