I had two customers asking today what happened to ESXi 6.5 build 7526125. They downloaded patches and installed them in their test environment. Ready to patch some of their clusters they did a validation and found out that the patch (ESXi650-201801001.zip) has disappeared from the face of the earth. This patch included microcode for Intel processors, and Intel informed VMware that there was potentially an issue with their microcode. As such VMware decided to pull the patch as noted in the KB article. Those who had already downloaded the patches and are manually updating, make sure to delete these. Those who use VUM, make sure to exclude them from your baseline as mentioned in the KB:

Any baseline (including VMware Pre-defined Baseline), that includes one or more of  the bulletins that  correspond to patch VMSA-2018-0004, would experience the above listed error and hence, will not be able to proceed with the remediation process. For such customers, it is recommended to create dynamic or static baseline excluding the bulletins ESXi650-201801401-BG, ESXi650-201801402-BG,  ESXi600-201801401-BG,  ESXi600-201801402-BG ,ESXi550-201801401-BG and continue with the remediation process. For more information on Create and Edit Patch or Extension Baselines see vSphere 6.5 document.

Normally I don’t share these types of things anymore, but as I had two people asking on the same day I figured I would as it seems not everyone had seen that the patches were pulled and replaced. If you haven’t downloaded the patches yet, or haven’t patched your systems but want to, read this advisory first and use the patches mentioned it.

I never really looked at VOBs but as this came up last week during a customer meeting I decided to look in to it a bit. I hadn’t realized there was such a large number of them in the first place. My conversation was in the context of vSAN, but there are many different VOBs. For those who don’t know VOBs are system events. These events are logged and you can create different alarms for when they are being logged.

You can check the full list of VOBs on ESXi, SSH in to it and then look at this file:

When they are triggered you will see them here:

And as stated when you want to do something with them you can create a customer alarm. Select “specific event occuring on this object” and click next: 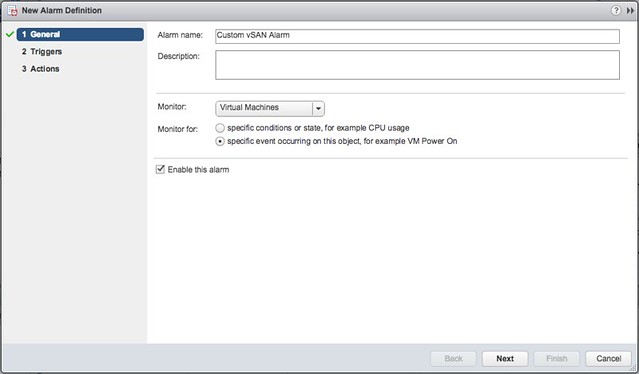 Now you add an event, simply click the “+” and remove the current value and simply copy/paste the VOB string in, the string will look something like this: “esx.problem.vob.vsan.pdl.offline”. Hit enter when you added it and then click “Next” and “Finish”. 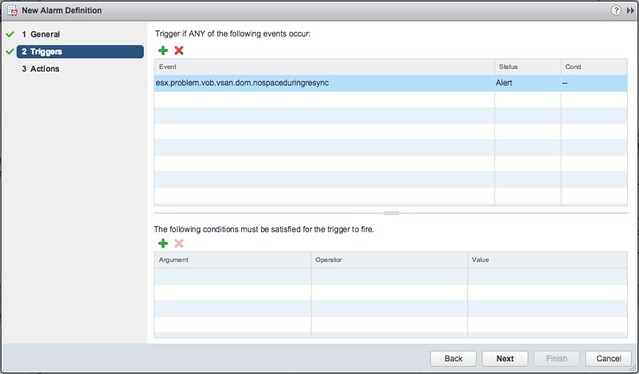 I find the following useful myself:

There are many more, and I just listed those I found useful for vSAN, for more detail check the following links:

I had a couple of people asking already, so I figured I would do a short post on where to find the ESXi Host Client vSAN section. It is fairly straight forward, if you know where to click. Open the Host Client by going to https://<ip address of your host>/ui. Next do the following:

You should now see the following:

I drew a red rectangle around the vSAN specific menu options. Just click through them. Just for demonstration purposes I disabled the VMkernel interface for vSAN on this host. As you can see in the “Hosts” section below this particular host has no “IP” address indicating you should check the network… Very useful for sure when troubleshooting. 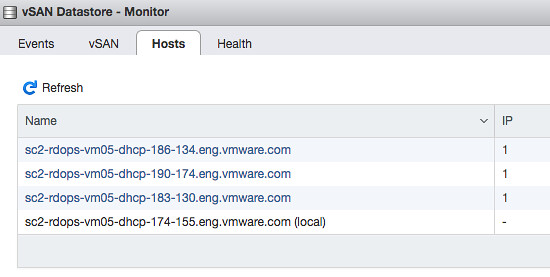 Of, of course the Health Check and the new Config Assist option vCenter also calls this out! With a link to the object even to fix the issue. If you would click the blue link you would go to the VMkernel config section in the UI… I love it how easy it becomes to fix and detect issues. Great work vSAN team! 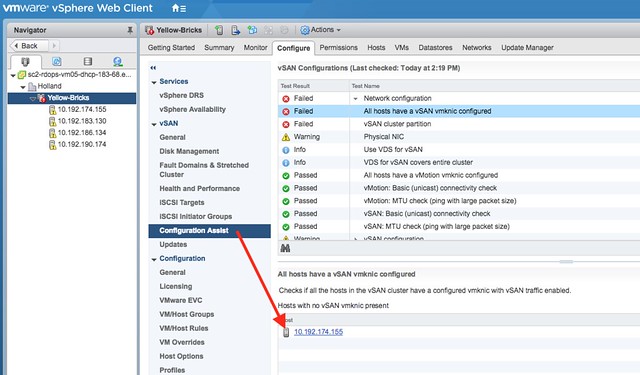 Just a short post. I was getting a 404 error with the Host Client when hitting https://<ip of esxi host>/ui. No clue what it was caused by. I re-installed the latest version of the host client but that didn’t solve it. Then I noticed that my endpoints.conf had “/ local” missing. You can check that as follows when logged in through SSH:

I did the following (edit + restarted the HTTP reverse proxy) to get it working again:

“I have memory pages swapped out to disk, can vSphere swap them back in to memory again” is one of those questions that comes up occasionally. A while back I asked the engineering team why we don’t “swap in” pages when memory contention is lifted. There was no real good answer for it other than it was difficult to predict from a behavioural point of view. So I asked what about doing it manually? Unfortunately the answer was: well we will look in to it but it has no real priority it this point.

I was very surprised to receive an email this week from one of our support engineers, Valentin Bondzio, that you can actually do this in vSphere 6.0. Although not widely exposed, the feature is actually in there and typically (as it stands today) is used by VMware support when requested by a customer. Valentin was kind enough to provide me with this excellent write-up. Before you read it, do note that this feature was intended for VMware Support. While it is internally supported, you’d be using it at your own risk, and consider this write-up to be purely for educational purposes. Support for this feature, and exposure through the UI, may or may not change in the future.

Did you ever receive an alarm due to a hanging or simply underperforming application or VM? If yes, was it ever due to prolonged hypervisor swap wait? That might be somewhat expected in an acute overcommit or limited VM / RP scenario but very often the actual contention happened days, weeks or even month ago. In those scenarios, you were just unlucky enough that the guest or application decided to touch a lot of the memory that happened to be swapped out around the same time. Which until this exact time you either didn’t notice or if you did, didn’t pose any visible threat. It just happened to be idle data that resided on disk instead of in memory.

The notable distinction being that it is on disk with every expectation of it being in memory, meaning a (hard) page fault will suspend the execution of the VM until that very page is read from disk and back in memory. If that happens to be a fairly large and contiguous range, even with gracious pre-fetching from the ESXi, you’ll might experience some sort of service unavailability.

How to prevent this from happening in scenarios where you actually have ample free memory and the cause of contention is long resolved? Up until today that answer would be to power cycle your VM or using vMotion with local swap store to asynchronously page in the swapped out data. For everyone that is running on ESXi 6.0 that answer just got a lot simpler.

As the name implies, it will page in memory that has been swapped out by the hypervisor, whether it was actual contention during an outage or just an ill-placed Virtual Machine or Resource Pool Limit. Let’s play through an example:

A VM experienced a non-specified event (hint, it was a 2GB limit) and now about 14GB of its 16GB of allocated memory are swapped out to the default swap location.