Cormac Hogan and I have been working late nights and weekends over the past months to update our vSAN book material. Thanks Cormac, it was once again a pleasure working with you on this project! As you may know, we released two versions of a vSAN based book through VMware Press. The book was titled vSAN Essentials. As mentioned before, after restructuring and rewriting a lot of the content we felt that the title of the book didn’t match the content, so we decided to rebrand it to vSAN 6.7 U1 Deep Dive. After receiving very thorough reviews by Frank Denneman and Pete Koehler (Thanks guys!) we managed to complete it this week after we added a great foreword by our business unit’s SVP and General Manager, Yanbing Li.

Cormac and I decided to take the self-publishing route for this book, which allows us to set a great price for the ebook and enable the Amazon matchbook option, giving everyone who buys the paper version through Amazon the option to buy the e-book with a nice discount! As prices will vary based on location I am only going to list the USD prices. Please check your local Amazon website for localized prices. Oh, and before I forget, I would like to recommend buying the ebook flavor! Why? Well:

“On average, each printed book releases 8.85 pounds of carbon dioxide into the environment. Together, the newspaper and book-printing industries cut down 125 million trees per year and emit 44 million tons of CO2.”

We appreciate all support, but we prefer the cleanest option from an environmental stance, this is also the reason we priced the ebook a lot cheaper than the paper version. Anyway, here are the links to the US store, we hope you enjoy the content, and of course as always an Amazon review would be appreciated! Interestingly, it seems we already reached number 1 in the category Virtualization and the category Storage before this announcement, thanks everyone, we really appreciate it! (Please note, as an Amazon Associate I earn from below qualifying purchases.) 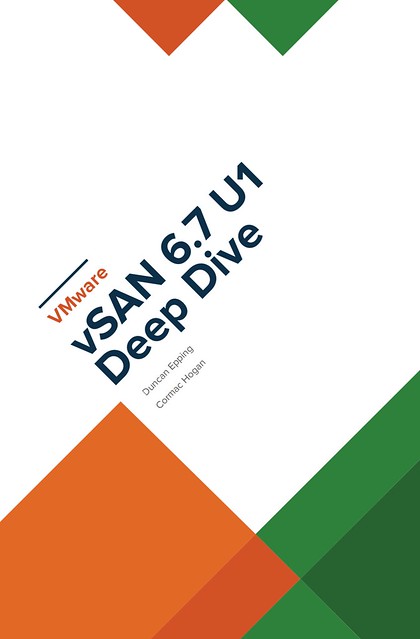 It appears that some Amazon stores take a bit longer to index the content, so listing all the different versions below for the different stores that sell it:

As all videos are posted for VMworld (and nicely listed by William), I figured I would share the session Frank Denneman and I presented. It ended up in the Top 10 Sessions on Monday, which is always a great honor. We had a lot of positive feedback and comments, thanks for that! Most importantly, it was a lot of fun again to be up on stage at VMworld talking about this content after 6 years of absence or so. For those who missed it, watch it here:

Also very much enjoyed the book signing session at the Rubrik booth with Niels and Frank. I believe Rubrik gave away around 1000 copies of the book. Hoping we can repeat this huge success in EMEA. But more on that later. If you haven’t picked up the book yet and won’t be at VMworld Europe, consider picking it up through Amazon, e-book is 14.95 USD only.

VMworld is the time for announcements, and of course for vSAN that is no different. This year we have 3 major announcements and they are the following:

So let’s look at each of these, first of all, VMware vSAN 6.7 U1. We are adding a bunch of new features, which I am sure you will appreciate. The first one is various VUM Updates, of which I feel the inclusion of Firmware Updates through VUM is the most significant one. For now, this is for the Dell HBA330 only, but soon other controllers will follow. On top of that there now also is support for custom ISO’s. VUM will recognize the vendor type and validate compliance and update accordingly when/if needed.

The other big thing we are adding os the “Cluster Quickstart wizard“. I have shown this at various sessions already, so some of you may be familiar with it. It basically is a single wizard that allows you to select the required services, add the hosts and configure the cluster. This includes the configuration of HA, DRS, vSAN and the network components needed to leverage these services. I recorded a quick demo that actually shows you what this looks like

One of the major features in my opinion that is introduced is UNMAP. Yes, unmap for vSAN. So as of 6.7 U1 we are now capable of unmapping blocks when the Guest OS sends an unmap/trim command. This is great as it will greatly enhance/improve space efficiency. Especially in environments where for instance large files or many files are deleted. You need to enable it, for now, through “rvc”. And you can do this as follows:

When you run the above command you should see the below response.

Unmap support is already disabled
6.7 u1: success
VMs need to be power cycled to apply the unmap setting
/localhost/VSAN-DC/computers/6.7 u1>

Pretty simple right? Does it really require the VM to be power cycled? Yes, it does, as during the power-on the Guest OS actually queries for the unmap capability, there’s no way for VMware to force that query without power cycling the VM unfortunately. So power it off, and power it on if you want to take advantage of unmap immediately.

There are a couple smaller enhancements that I wanted to sum up for those who have been waiting for it:

Another announcement was around a vSAN Beta which is coming up. This vSAN Beta will have some great features, three though have been revealed:

I am not going to reveal anything about this, simply to avoid violating the NDA around this. Sign up for the Beta so you can find out more.

That was it, well… almost. This whole week many sessions will reveal various new potential features and futures. I aim to report on those when sitting in on those presentations, or potentially after VMworld.

A while back I was asked if I could present at the VMware Technical Support Summit and last week I received the agenda. I forgot to blog about it so I figured I would share it with everyone. I was supposed to go to this event last year but I had a clash in my calendar unfortunately. At this event organized by our support team you will have the ability to sit in some extreme deep dive sessions. Below you can find the agenda, and also here’s the registration link if you are interested! Note that Joe Baguley will be doing a keynote, and Cormac Hogan and I will be doing a session on vSAN futures! 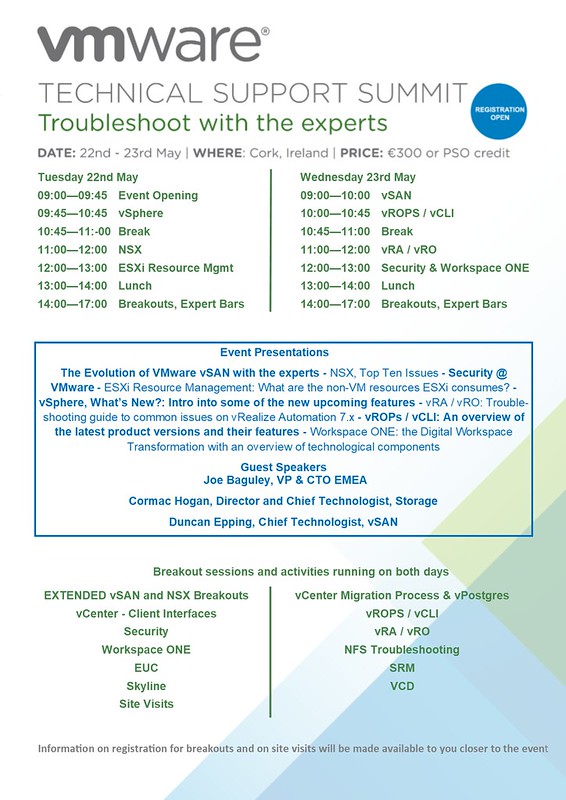